What Was This Amazing Building before It Was Sydney's Drive-In? 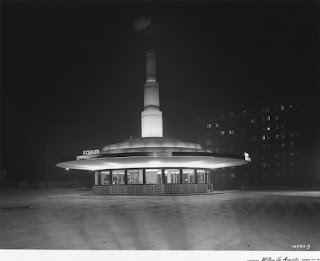 “The hot-rod loop”: that’s how Gaila Fletcher characterized one popular drive-in restaurant circuit in south Kansas City:. “Sidney’s on the Plaza, Winstead’s, and Sidney’s on 31st. Those were good times.” (Sept. 2, 2017, KC: Lost Drive-ins). Indeed, Sidney’s was integral to many area teenagers’ memories of a hallowed time in their lives, that space of roughly five years when keys to an automobile defined how one spent one’s free time, and where burgers and malts were to be had for pocket change. However, what is also important to Sidney’s history was one of the buildings it inhabited at 48th and Main, sometimes referenced as Main and Ward Parkway.

In 1941, shortly after Winstead’s opened at 47th Street, just eat of the Plaza, Clarence Hayman opened a short-lived Forum Drive-In at 4800 Main in a Wayne McAllister-style building with a circular shape and giant roof pylon. Jan Whitaker notes that McAllister’s Los Angeles drive-in design also included horizontal louvers that partially concealed the neon tubes to make the pylon glow, an immediate beacon on the horizon to draw in motorists who would see it off in the distance. While Forum Cafeteria would go on to become a citywide and regional icon, the company's drive-in concept was short-lived.

By 1944, that same drive-in at 48th and Main became Z-Lan, managed by Herakles G. Tangalos. Z-Lan ingeniously overcame wartime beef shortages by featuring fried rabbit dinners and fried rabbit and fried chicken sandwiches. Z-Lan was described in WHB’s Swing Magazine as the place where “cliff dwellers from the Locarno, Biarritz, and the rest of the tall Plaza apartments gather nightly for sandwiches and late snacks.” 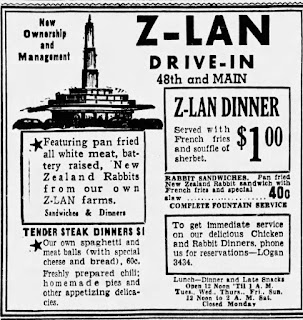 An April 1944 advertisement for Z-Lan, a drive-in that made full use of rabbit during a time of World Wart Two beef scarcity

Tangalos' death in 1947 resulted in a new business moving in: NuWay, a popular eatery that began in Wichita, Kansas, in 1930 and that had several locations in Kansas City throughout the 1940s, '50s, and '60s. NuWay was famous for its loose-meat sandwich (if you crave such a thing as I often do, make sure to check out another KC institution, In-A-Tub and order their addictive pocket burgers).

The next client at 48th and Main was the Y Drive-In, owned by Irvin Joffe. He operated several Y Drive-Ins around Kansas City and Independence into the 1960s. Advertisements for the Y-Drive-In, however, are harder to come by, although it specialized in classic drive-in fare, including burgers and fries.

The drive-in that survives in more Kansas Citians’ memories, however, was Sidney’s, which took over the 48th and Main spot from 1959 to 1974 when in sad Kansas City tradition, the restaurant fixtures were sold at auction, and the structure torn down. I feature the history of Sidney's and other drive-in icons like Peter's in Kansas City, Kansas, in my forthcoming book, _Lost Restaurants of Kansas City_, due out in April, 2022. Stay tuned! 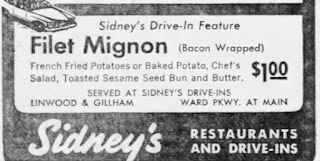