“A sanctuary of gracious food,” praised Roadfood critics Jane and Michael Stern. A “great spot for a very inexpensive, delicious, home-cooked meal,” judged the Clarendon Guide to Kansas City Restaurants. “A place with a homey atmosphere and a balanced menu, where people can get a little bit of everything,” Leona Kahler Yarbrough stated matter-of-factly concerning her eponymous restaurant in Fairway, just minutes from the Country Club Plaza. 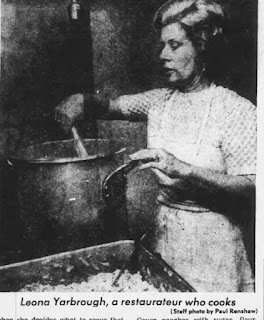 A photo of Leona from the Kansas City Star, 1976

Yarbrough had much in common with her mentor and employer, Anna Petersen, as well as with Ruby Watson McIntyre, Bernice Hanson, Louise Sandstrom, and Tena Mae Dowd--strong women restaurateurs who worked well with male colleagues, but who refused to be dominated by them in an industry where women (aside from hostesses and waitresses) were rare. Like these women, Yarbrough was not only talented and competent, but she was also modest and disliked pretension. She proudly called herself a “cook” and not a “chef.”

Teenager Leona Kahler learned to cook for large numbers during harvest seasons on her family’s farm near Vandalia, Illinois. Rather than resent the work, she loved it.  When she, her husband, and young son, Ronald, moved to Johnson County, she feared having to work in an office or in a factory and was thrilled when in 1950 Anna Petersen posted a want-ad for “inexperienced help” for her new restaurant, sometimes called Fairway Restaurant, and at other times Mrs. Petersen’s Restaurant. Yarbrough began by waitressing but soon was in the kitchen learning to create specialties from Petersen’s native Scandinavia, such as frikadeller and red cabbage, learning bookkeeping, and sometimes acting as hostess. By 1955 she was listed in the Polk’s Northeast Johnson County Directory as “Assistant Manager” at Fairway Restaurant.

Meanwhile, Yarbrough’s son, Ronald, also began helping in Petersen’s restaurant, excelling as a baker and taking over the pies, breads, cakes, and rolls, all house specialties that stayed on the menu after Anna Petersen retired in 1965 and Yarbrough bought the restaurant in 1966.

Yarbrough saw no reason to alter the menu or manner of operation when she assumed ownership. The method by which patrons ordered, a throwback to the days of tearooms, gave the restaurant distinctive charm. Order booklets on the table allowed diners to take their time deciding what they wished to eat, marking their choices, and handing their completed order to the waitress.

Yarbrough’s philosophy was simple; the more she cooked and planned the menu, the less money it would cost her. She started in the early morning, went through her walk-ins and pantries, determined what was on hand and what to order, and created that day’s lunch menu. She then did the same with dinner. Roughly ten specials per day were offered.  As she explained to Kansas City Star reporter Jane Fowler, “If I hired a chef to do the planning, we couldn’t offer the prices we do. I also cook every day. And my son is the baker. We have a lot of good helpers, but I cook everything for lunch.”

At age sixty-five, Yarbrough retired, and Ron and his wife, Barbara, took over, moving the restaurant to Shawnee, Kansas, in 1989. After a long battle with cancer, Ron, passed away in September, 2006. The beloved restaurant held on a couple of more years but then closed. Ron’s recorded last words in the Star obituary stand as key to his and his mother’s restaurant’s legacy: “Family was always first and the restaurant a very close second because it was part of the family.”