Baked Onions and Cheese, The Devonshire Way (recipe below)

If Florence White had it to do over again, I imagine that she would revise her memoir, A Fire in the Kitchen: The Autobiography of a Cook, to give over two-thirds of its pages to what takes up a mere fourth of the book she did publish. My intention had been to make this post the final installment in my series summarizing the contents of A Fire in the Kitchen, but for the sake of readers who might need more, as opposed to less, information on this woman’s career, I will make this post the penultimate one.

We begin where I left off previously with White having returned to Edinburgh where along with journalism, she was invested in social work, offering free cookery lessons through the newly formed Edinburgh Health Society. White reached out to impoverished mothers, some of whom informed her that they could “‘cook right enough if we have the money to get the food,’” and “‘we should like to come [to the cookery classes] but we can’t leave the children’” (p. 248). These hard facts of poverty never left White, convincing her that the topic of food must never divorced from issues of gender, economy, class, and labour.

Shortly thereafter, White became Matron the Scottish Girls’ Friendly Society Lodge where until March, 1916, she oversaw marketing, cooking, and teaching the girls how to cook thrifty wholesome meals in spite of a raging war and food shortages. “During the winter,” White wrote proudly, “we had porridge every day; during the summer a home-grown salad such as mustard and cress, or a bought salad consisting of radishes, tomatoes, and spring onions. For relish we had scrambled eggs, hot or cold bacon, fresh soused herring, fried potatoes, fish cakes, sausage and potato cakes, finnan haddock, kippers, and above all home-made potted meat or fish. We had marmalade all year round” (p. 264-65).

In spite of White’s success, someone spread a rumor that White drank and took drugs. Even though she was exonerated, the damage had been done. White left the Lodge to begin a six-year stint in England working on and off as a domestic servant. Although she had some satisfaction with the work, using her employment as a time to indulge in “a number of interesting experiments in cookery,” White’s health suffered from the labour (p 280). Her health was further compromised by the Spanish Flu pandemic of 1918. Her case initially appeared milder than most, but it left her often debilitated. As was White’s pattern, she used periods of convalescence to study, focusing on American cookery and nutrition books.

In December, 1921, age 58, White officially retired from domestic service. Taking lodging in Chelsea for 8 shillings a week, helped by her brother’s and sister’s allowance, White set out to earn her living exclusively by writing. “Necessity,” White contended, made her into a food journalist--that, along with the “abuse in the Press of English cooks and cookery. When to the abuse of English cooks and cookery was added abuse of English hotels and sneers at Victorian women, indignation whetted my enthusiasm,” White announced, “and I became unceasing in my efforts to support all four: English cooks, English cookery, English hotels, and our splendid Victorian women” (p. 297). In White’s calculation, the only other person championing English cookery and its delights was Charles Cooper, author of The English Table in History and Literature (1929) and editor of two short-lived periodicals,The Epicure and The Table.

Given White’s evident love of and extended residency in Scotland, her use of the word “English” to describe British cookery might be understood to encompass all of Great Britain--a justified grievance on the part of the Scots, Welsh, and Cornish for centuries--but it might be White’s recognition that her finances and health restricted the remainder of her life’s work to England alone. For the sake of continuity, I, too, will use the terms “England” and “English food” for the remainder of this post and the next, but when it is clear that White is speaking more broadly of the British Isles, I will alter my usage accordingly.

White studied food history at the British Museum and the Patent Office Library while visiting markets and shops throughout London. As money allowed, she built up her cookery book collection so that when exhaustion or ill health kept her in bed, she could nonetheless continue her research.

A common theme in the last portion of A Fire in the Kitchen is White’s justified indignation at how often her writing was plagiarized. All the work she had done for free over several years--the research, the contextualization, the recipe development-- was being “copied and used by other people, camouflaged or not” (p. 300). White was nonetheless conflicted: “looking back, I see that the fact of my work being so widely copied did help to make English cookery popular. It gave it more publicity than one person alone could have given it” (p. 300). But “the hardship was personal,” she concluded. “I had all the expense of doing original work, which was cheapened by being used by others without my even being given credit for it. Those who copied my ideas and used my stuff, dressed up in one way or another, made money, while I remained poor, and if it had not been for my brother and sister I could never have pulled through” (p. 301).

Pessimism did not deter White from continuing her highly interdisciplinary work, however, combining expertise in food history with her uphill battle to convince women that cookery did not mean drudgery. “What I was trying to do . . . was to make girls of every class interested in cooking, and also to persuade the ‘high-brows’ that cooking and the subjects connected with it, such as agriculture, fisheries, markets, dietetics, etc. can exercise the intellect just as much as any other academic study. What I was really doing was putting English cookery on the map” (p. 313).

In 1924, White secured help from the Civil Service Supply Association to set up an Experiment Kitchen where she could test recipes. She likewise “matriculated at the University of Chicago as a corresponding student in tea-room management and wanted more equipment and space for working out experiments” than what she had with the tiny oil-stove in her Chelsea bedsit. She conducted work in the Experiment Kitchen for 8 years.

Among the events that goaded White to form the English Folk Cookery Association was an unnamed French association that sent speakers to England’s exclusive public schools with the sole purpose of advocating to the students “French cookery and wines, and holidays in France” (p. 314). Clearly, the students were being indoctrinated, taught that people of their class must snub English “food” in favour of French “cuisine.” White was invited to join the association but declined, not only because she was busy (the reason she gave the Association), but because she was angry that its motives essentially gave the English press liberty to continue to “abuse . . . English cooks and cookery” (p. 314-15).

When the village of Camembert put up a memorial to Marie Harel, the (presumed) creator of Camembert cheese, White was thoroughly fed up. 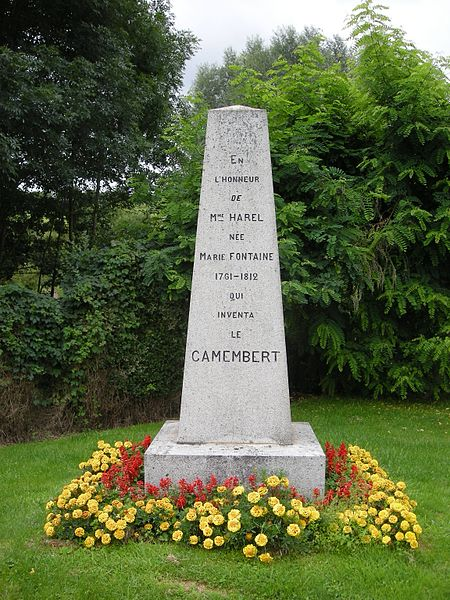 The memorial in Camembert, France, that goaded White to take up the cause for her own nation's food treasures (photo, Wikimedia Commons)

“Why the devil don’t we write up our own men and women?” White asked. “Who invented Stilton cheese? Why isn’t a memorial put up to her?” (p. 315). Alarmed at people’s ignorance as to what “English food” even meant “beyond roast beef, Yorkshire pudding, and Christmas plum pudding,” White increasingly honed her focus and her mission: to locate and not only write about the origins of Stilton, Melton Mowbray pork pies, and Bath’s Sally Lunn tea cakes, but to eventually compile recipes for such delights from all over the British Isles. 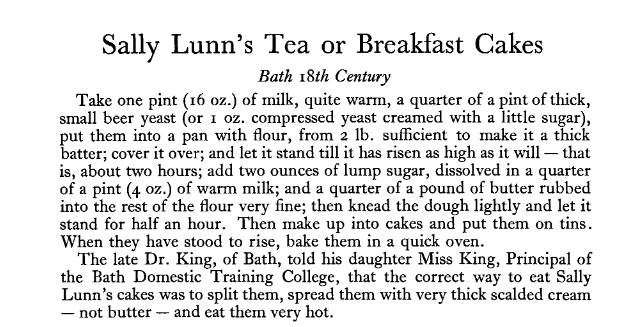 
White set about creating a gastronomic map of England, but when she pitched her idea to a local newspaper in 1927, it was rejected. Compounding White’s frustration was that a “Sunday paper wrote eulogizing a French gastronomic map which had been prepared by a cook, and, of course, English cooks were given a slap in the face: ‘No English cook had taken the trouble to do it.’ An English cook had taken the trouble to make one, and was adding to it month by month; but what was the use? Nothing an English cook did was appreciated, or noticed!” White exclaimed (p. 316).

White nonetheless had a keen sense of irony and perhaps even a love for the absurd. Whereas others might have been defeated, she simply looked for a new strategy to publicize both the existence and the importance of English foodways. As she pointed out, “We had the finest cookery in the world, but it had been nearly lost to neglect (p. 317). To save regional dishes from utter extinction, in 1928 White published a query in the Times and “suggested that all who were interested should join together and form an English Folk Cookery Association” (p. 317). White was already a member of the English Folklore Society (EFS), and she envisioned her new Association might act as a link between EFS and the Association of French Chefs in London (Association Culinaire Française)--a group who immediately rejected White’s suggestion of such a link (pp. 317-18). Undeterred, White founded the English Folk Cookery Association in 1828.

White obviously faced many challenges, chief among them the ignorance and prejudice that her fellow citizens exhibited when it came to their own foodways. Reasons for those attitudes are complex and not the purpose of these posts about White and her scholarship, other than to point out that policies that had been put in place roughly two centuries earlier (particularly land enclosures and agricultural reform) that, along with the Industrial Revolution, had significant negative repercussions on British food production. Severely compromised was the ability of average people to not only cook for themselves and families, but to pass on regional recipes and culinary techniques. Furthermore, as tens of thousands of rural people were forced into cities to find work in new factories, they were subjected to a great deal of low-quality, typically adulterated ready-made food, given that many people did not have time or space to cook most meals themselves. I write about these challenges in Food and Cooking in Victorian England: A History. My final post for this series will focus on the invaluable work of the English Folk Cookery Association and the publication of White’s most important book, Good Things in England: A Practical Cookery Book for Everyday Use, Containing Traditional and Regional Recipes Suited to Modern Tastes (1832).

Until then, I leave you with one of my favorite supper dishes taken from White’s Good Things in England, “Onions and Cheese”, The Devonshire Way.

“This has been sent in from Plymouth. The onions are either boiled or baked, seasoned with salt and pepper, served whole or cut in halves with butter on them, and eaten with bread and uncooked cheese. Miss McNaught, who had them at a friend’s house, says they are delicious.”

Indeed, they are--and so simple. I halved yellow onions that I purchased at the farmer’s market, put them in a buttered baking dish, poured over them a bit of cream for moistening, and then added salt, pepper, and finely chopped sage (any garden herb will do) and dots of butter. I covered them with foil and baked them at a moderate heat for a half hour, after which, I removed the foil and added a scant grating of a sharp English cheddar for flavour and color. When they were done (another 30 or so minutes) I served them with homemade bread and a wedge of that same cheddar.
Labels: British and Celtic Cookery