Florence White: A Biography of Britain's Champion of British Cuisine, Part One 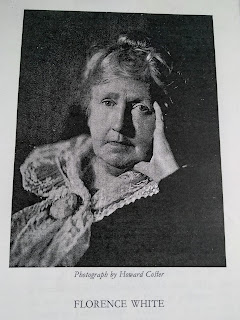 I first happened upon Florence White’s extraordinary contribution to cataloguing English foodways when I was writing Food in Victorian England: A History. White’s dismay at how the English treated their own food heritage motivated her to form the English Folk Cookery Association (EFCA) in 1928 and to compile hundreds of recipes sent to her from all over England, and in some cases, Scotland and Wales. Good Things in England: A Practical Cookery Book, was published in 1932 and included 853 recipes. White also added an introduction as well as head-notes to accompany many of the recipes.


This book remains easy to locate. My copy was published in 1968 with Jonathan Cape through the Cookery Book Club series. In 1999, Persephone Press reissued the book as well. 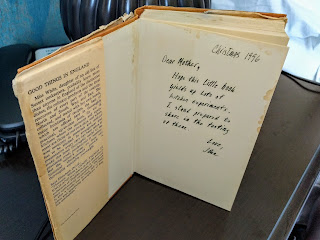 Buying used cookbooks with notes and annotations adds to their importance. Here's my used copy.

More recently, my quest to understand the history and influence of Raymond Postgate’s Good Food Guide has led me back to Florence White because among her other feats, White and the EFCA produced the Good food register (1934, 1936) and an expanded 1936 version, Where to eat or put up in England, Wales, Scotland, and Ireland (Practical Press, Ltd). This guide helped people discover the best places where they could eat quality British and Irish cuisine. Why did Postgate reject White’s models when he started his Good food guide in 1951? Why did he instead gravitate towards Le Club des Sans Club, a French guide to restaurants that likewise resembled in many key respects White’s? My research seeks to arrive at answers.

The questions were themselves the result of coming across an essay by Janet Floyd entitled “The restaurant guide as romance: from Raymond Postgate to Florence White” in David Bell’s Historicizing lifestyle: mediating taste, consumption, and identity.

I have been unsuccessful in acquiring any of the Good food registers or Where to eat and put up; however, due to the persistence of my college’s interlibrary loan librarian, Jan Brooks, I was able to borrow White’s wonderful A fire in the kitchen: the autobiography of a cook, published by J.M. Dent, 1938. Because this book is likewise rare, particularly in the U.S., I would like to share the details of White’s biography over a series of posts so that others can utilize this information for their own research and/or to enhance their knowledge of a woman whose life should be better known. I am happy to correspond with anyone with knowledge of or interest in White and her remarkable contributions to cataloguing British dishes.

Florence White, born June 20, 1863, was the daughter of Richard White and Harriet Jane Thirkell. Thirkell was White’s second wife. She died on June 2, 1869 when Florence was almost seven. Richard then married Ann Pope, White’s stepmother, with whom she had a fraught, difficult relationship.

Important to White’s foundation and interest in food were three paternal aunts: Harriet, Hannah, and Louisa. They ran the Red Lion Hotel in Fareham, when White’s grandfather died in 1854, cooking the “good epicurean country-house cookery which had been handed down in the family from mother to daughter since the days of Queen Elizabeth,” White notes (p. 338).

In honour of White’s aunts who ran the Red Lion Hotel and Assembly Rooms from 1855 to 1881, the English Folk Cookery Association (EFCA) was located in Fareham from its inception until its demise in 1940, shortly after White passed away (this conjecture of the EFCA's demise is given in my edition of Good things in England, p. 12].

Part of White’s early training as a cook was enhanced when she was sent to Fareham from 1881-1882 to help care for her two remaining ailing aunts, Louisa and Harriet. Because the country houses kept them supplied with poultry, eggs, fish, game, and vegetables, White had a rare opportunity to work with ample, high- quality ingredients. “I learnt to prepare and cook, in the best English way, the best English country food. I remember having to paunch a hare. Drawing and trussing poultry and game were quite everyday affairs, and it all had to be done correctly because the aunts were accustomed to their meals being well cooked and served in exactly the right manner. Once I had to roast a leveret [young hare] and baste it with milk and butter” (p. 77).

White’s most “vivid recollection” of time spent with her aunts prior to their retirement concerned market day. She would watch as Charles, the waiter, carried in for the farmer’s meal “the great round apple-pudding which, from its shape, must have been boiled in a cloth, as all good puddings were at the time” (p. 30).

White believed that it was “silly not to preserve the good things of the past. They should be added to our modern good things and thus enrich us all” (p. 20). Towards that end, her autobiography was designed to offer a real picture of English life between 1866 and 1935.

Thus, Chapter III, “My first seven years,” included numerous details about how the White family prepared their meals and what they ate. The Sunday joint was roasted by servant Eliza in front of the big kitchen fire. The meat was always accompanied by a Sussex pudding, a “delicately light suet pudding”, over which White's father poured on the red gravy. Meat and pudding were served along with vegetables and potatoes. “I remember hearing my father say that the real Sussex pudding was made without fat, but with flour and water only, and that no one but a Sussex woman could make it. He said that when it was boiled and turned out of the cloth it was cut in slices and put in the dripping to brown in the pan under the meat” (p. 23).

Significantly, White’s mother also cooked, and White remembered as a little girl being in the kitchen with her making pastry, banging the dough as hard as they could when making Kentish flead cakes. 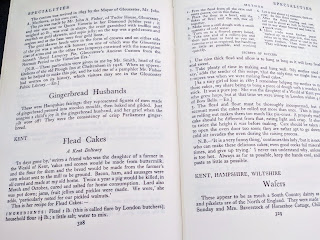 Flead, or leaf lard, is critical to creating this lovely biscuit (American)-scone (British). The method is similar to producing the Southern American classic, beaten biscuits. If you want to test whether you are a born baker, this is the recipe to attempt.
White also recalled the black currant pie served for dinner when she and her mother went to stay with her mother’s cousins, the Thirkells, who lived on a diary farm in Hazelden, near Cranbrook in Kent. At the time, each dairy had its own particular wooden mould for its butter; the Hazelden mould was a swan.

For family holidays in Worthing the landlady served the children red currants and raspberries stewed with fine sago. “This was new to me. Evidently I always took an interest in unusual food. I have learnt since that this dish is an old Sussex specialty,” White recalled (30).

When visiting her Uncle Edward and his family in Great Barr, Staffordshire, White was allowed to help her aunt make potted shrimps and rhubarb wine. “These cookery operations, which I watched and in my small way shared, were extremely useful to me in after years,” White wrote. 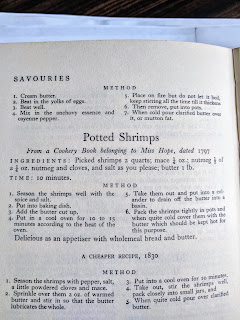 A Guardian article by Felicity Cloake speaks to White's recipe and its genius. See "How to cook perfect potted shrimps."

Before White’s mother died, Christmas was a joyous affair where they had “snapdragons with the lights turned low. The blue flames of the raisins soaked in brandy gave sufficient light, their vivid reflections adding to the fun. At Christmas there was always the ritual of making and stirring the Christmas puddings, one of which made its entrance on Christmas Day, blazing on a dish” (p. 33).

At the conclusion of “My first seven years,” White wrote: “There was never a happier, lovelier home as long as [Mother] was alive. The love she was so rich in not only made the fire in the kitchen, but warmed all our hearts” (p. 34). Her mother died in June, 1869. Just before her death the family had moved from Peckham to Lewisham.

Shortly after her mother died, White lost permanent sight in her right eye when her father gave her for Christmas a chameleon top with a wire that flew out and hit her eye. Eventually, when she was much older, the eye was removed and replaced with a glass eye. Poor eyesight kept White from achieving her dream of a university education at Cambridge College, Girton, and teaching full-time in a high school.

Furthermore, likely due to financial strains, White’s stepmother took her out of school after Christmas, 1877 when she is 14 ½, ending her formal education. Having moved on White’s 15th birthday in 1878 from Lewisham to a semi-detached house in Oxford Terrace, South Beddington with no room for a servant, White “was set to work to teach [her] step-brothers and sister, do the cooking and scullery work, and also a certain amount of upstair bedroom work” (62).

For the next three years White was "a veritable Cinderella." The "proof lay in the fact that an old man who came to the backdoor selling bloaters, oranges, and nuts, would frequently give me something for myself; and the old sweet-woman who came around on Saturdays selling home-made bull’s-eyes would always give me a screw of peppermint balls, with a ‘Bless your sweet face, darling’” (p. 66).

While White had been privileged to work with high-quality, abundant ingredients when helping to care for her aunts, she had been accustomed to cooking with very little--equally essential to her education as a fine cook. White noted that she made her family a hot-bed of garden rubbish to grow vegetables, and that their being “frightfully poor” necessitated her creativity and care in the kitchen where she “learnt to make savoury dishes out of very little, and not to waste anything. At that time we could get a sheep's head and pluck from our butcher for ninepence. This included the head with tongue and brains, the heart, lights, and liver. A very good bargain. We always had this once a week, the lights being afterwards boiled up and mixed with mash for the chickens” (68-9).

Family meals were sometimes made more lively when Uncle Joe (White’s stepmother’s brother) would visit Aunt Nell’s, whose husband was financially better off. Uncle Joe would come back with a large basket of “pieces” that were supposed to be for the chickens, but Aunt Nell would also pass along to the White soup bones and other left-overs. White proudly used some of the scraps to create a savoury roly-poly suet pudding stuffed with ham mince. To her surprise, she found out in 1926 when she “began to travel all over England in search of food and cookery lore . . . that . . . this bacon pudding, as it is called, is a real old English dish” peculiar to Sussex, Hampshire and Somerset” (p. 71).

On country walks with her siblings, White would venture as far as Smitham Bottom and Coulsdon where in the springtime, “masses of primroses” bloomed, and in the autumn, blackberries. “The blackberries we used to gather eagerly and carry them home to make puddings and pies and jam, a great help to my catering and cooking” (p. 74).

White began at age 16 to teach some of the children of a family acquaintance and also to teach Sunday School at Bandon Hill Church, handing over her earnings to her stepmother. In spite of such packed days, White continued her own studies independently, and she passed the third, second, and first class College of Preceptors Examinations and took prizes for freehand and model drawing at South Kensington.