Luck was not just with the Irish but with me this year, in that my Spring Break fell during St. Patrick’s Day. I had the unusual luxury of cooking up a feast instead of grading papers!

I decided to use An Irish Country Cookbook for ideas and recipes. This cookbook is inspired by a series of novels by the Irish-Canadian author Patrick Taylor who created the fictional Northern Irish town of Ballybucklebo and filled it with many engaging, memorable characters, including the Dr. Fingal Flahertie O’Reilly, junior doctor Barry Laverty, and most important for my purposes, O’Reilly’s cook and housekeeper, Maureen “Kinky” Auchinleck, lately Kincaid nee O’Hanlon. _An Irish Country Cookbooks_ keeps with this fiction, and in it the character Kinky offers readers the recipes most loved by Doctors O’Reilly and Laverty. 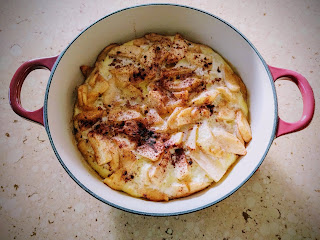 Apple and Bread-Crumb Pudding, with Cinnamon

Everything that I made for our St. Patrick’s Day feast, from the Wheaten Bread with Salmon Pâté to the main course of Homity Pie, to the Apple Bread-Crumb Pudding, were delicious, and I urge you to purchase this cookbook to add to your own Celtic collection if you have not already done so. However, the recipe that prompted me to write this post is Homity Pie, a dish with a particularly confusing history.

Most Google searches will inform readers that Homity Pie is a made-up English name for a WWII-era cheese, onion, and potato open-faced pie designed to stretch rations. It was thought to have been invented by the Land Girls, the nickname for the Women’s Land Army. This is also the information offered in An Irish County Cookbook, where Kinky accompanies the recipe with a preface: “This recipe was given to me by Doctor O’Reilly when he came back from the war. He said that Marge Wilcoxson, who was the wife of his senior officer on HS Warspite and who lived in Fareham near the hospital in Gosport where O’Reilly had been seconded for training in anaesthesia, used to make it. It was invented by the Land Girls using ingredients that could grow in the fields” (p. 127, An Irish Country Cookbook).

The thing of it is, I can not find any mention of Homity Pie in period cookbooks, although I confess that my search has not yet been exhaustive. If anyone could enlighten me with leads to 1930s and ‘40s-era Homity Pie recipes, I would be appreciative.

What I do find are many wartime recipes from the leaflets distributed by the Ministry of Food that were designed to ensure that all citizens were adequately fed. Repeatedly, the recipes for pies were made of all available vegetables, the cheese ration, and pastry (leaner and healthier than most versions today). Eating for Victory: Healthy Home Front Cooking on War Rations_ edited by Jill Norman, is a nifty facsimile collection of wartime recipes.

My hunch is that Homity Pie was a more pleasing name, a lighter-hearted version of the well-known “Woolton Pie”--the butt of derision, probably because those making the pie--harried, hungry, anxious women just off wartime work and trying to put dinner together--were less interested in the subtleties of vegetarian cooking than in quieting equally hungry, anxious children! In other words, carefully made, Woolton Pie can be delightful, but carelessly made, it can taste like mortar paste. 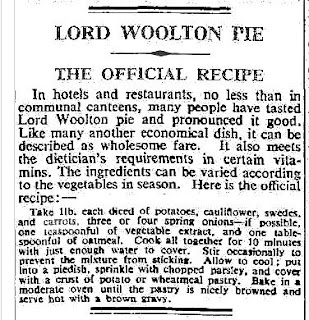 Lord Woolton, head of the Wartime Ministry of Food, ensured that no matter how boring and monotonous food was in Great Britain during rationing, people nonetheless did not go hungry or malnourished. The Woolton Pie was actually created by François Latry, chef of the Savoy Hotel in London. The Virtual World Carrot Museum has a history of the Woolton Pie for those interested.

At any rate, I used the Irish Country Cookbook Homity Pie recipe more as inspiration for my own version, enriching the filling with the languishing root vegetables in my refrigerator, as well as an extraordinary Trader Joe’s find: White Leicester cheese--extraordinary because White Leicester was partly the result of the British Wartime government ending the making of all specialty cheese as well as adding colouring (annatto, for example). Instead, a uniform factory cheese was introduced, made to a national recipe designed to meet the nation’s rationing demands, “White Leicester” was a common name for this white cheddar. The history does not sound enticing, but Trader Joe's version was delightful. (Read more about its history at the British Cheese Board site.)

In the spirit of a 21st-century Irish holiday of rich food, rich music, and rich conversation, Homity Pie is hardly about privation, but nonetheless, it is a beautiful vegetarian main course, and paired with a green salad, is filling and nourishing to boot. 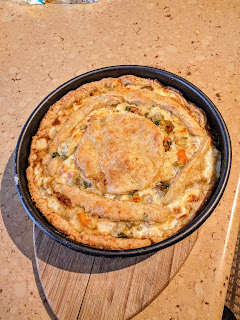 
Serves 4-6, depending on appetites


Note: In keeping with the spirit of seasonal frugality, do not neglect to incorporate and/or substitute other vegetables. For example, a parsnip will add a lovely sweetness. Cauliflower and cheese are a marriage. Do avoid watery vegetables such as tomatoes, however.


For Pastry:
Frozen butter makes short work of pastry forming. Place the flour, seasonings, and baking powder in a large bowl, and mix by hand to aerate. Add in shredded cheese and mix again. Using a box grater, grate the frozen butter onto a cold plate. When done, empty the frozen, grated butter into the flour and using your hands, quickly work to rub the butter into the flour. You want the mixture to resemble sand.


Make a well in the middle and add the cider vinegar and two tablespoons of ice water, Using a fork, begin to incorporate the flour and the liquid, slowly adding enough water until you can bring the dough together with fork and by hand. (I always use more water than what recipes call for, and I am no longer anxious when I must go over the recommended amount. You want your dough to come together easily, not painfully!)


Knead the dough until it all holds together in one piece, and when you get it there, put it in plastic wrap and allow it to rest in the refrigerator while you make the filling.


The Filling:
Preheat your oven, and if you have one, a pizza stone to 400 F. A pizza stone will help ensure that the pie does not suffer from a soggy bottom; conversely, you can blind bake your crust. Or: you can simply not worry about the crust!


While the oven is preheating, cook your potatoes in salted boiling water for 8 or so minutes, and then add in the turnip and carrot and continue cooking for another 3 or so minutes. You want the vegetables just tender. Drain well, and set aside to cool.


Melt butter and oil in a frying pan and add in the onion and leeks. Fry them until they are softened and starting to brown a bit, and then add the garlic and grated nutmeg and stir until aromatic. Blend the fried onions and leeks with the vegetables, and when again it is just warm, not hot, add in half of the shredded cheese.


Take your chilled pastry and roll it on a lightly covered surface. Line a deep pie dish or cake tin with the pastry, crimping the edges. If you have left-over crust, use it for the top, but it is not essential.


Blind bake or if using your heated stone, go ahead and fill the pastry with the vegetables and cheese. Put the remaining shredded cheese on top, and place any remaining pastry on top as well. Carefully pour in the cream around the edges. If you desire, glaze the top crust with an egg beaten with a tablespoon of water.


Place your pie in the oven on the stone or on a baking sheet and turn the heat down to 350 F. Allow the pie to bake for 40 minutes, and then check. It’s ready when the pie is bubbling and the cheese and/or the crust is browning nicely.


Allow the pie to cool for at least 5 minutes to set up. 10 is better. Cut into wedges and serve.


Note: All photos and texts are the exclusive property of Andrea Broomfield and must be acknowledged as such if borrowed.