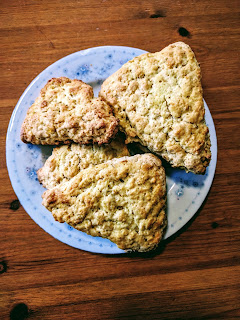 As summer finally moves into autumn here in Kansas, USA, I start thinking of scones. It’s such a pleasure to wake up on a Sunday morning and bring back my memories of tramping through the Scottish Highlands and the Welsh Brecon Beacons by making a batch of oatmeal scones and then topping the beauties with thick-cut marmalade.

Scones are fundamental to Celtic bakestone cooking during a time when few people had wall ovens or did not have the fuel and time to fire it up more than once a week. Because scones were made and cooked quickly, they were an efficient food, using minimum fuel and taking minimum time. The quality of scones was forever improved by the 1860s when chemical raising agents became commercially available, aerating what had before been likely tough, thick baked slabs of dough.

Oatmeal is also fundamental to Celtic baking because this grain, along with barley, grows better in damp climates than does wheat; thus it was cheaper and easier to obtain in Scotland, Wales, Cornwall, and Ireland. A mixture of oats and wheat flour makes for a delicious scone, however, giving more rise to the dough but also a delicious flavor and texture.

This morning, I decided to see what would happen if I mixed orange marmalade right into the scone batter instead of topping the baked scones with it, and I was pleased with how easy and delicious the scones tasted with the marmalade baked right in. I also added another punch of flavor by grating into the dough one orange’s worth of zest.

The trick with scones is to never over-mix them. The more handling the dough receives after the liquid has been added, the tougher the scones will be as gluten is developed. It is also important to use your eyes, hands and common sense when it comes to forming the dough. Some flours will need less liquid and some more, depending on the flour itself as well as the weather on the day of baking. Adjust these measurements below accordingly. I use Hudson Cream unbleached all-purpose flour, a hard winter wheat variety that comes from Kansas.


4 ½ ounces rolled oats (not quick-cooking or instant), toasted for 7-9 minutes at 350 degrees Fahrenheit (176 Celsius) and cooled thoroughly (I do this the night before.)
8 ounces (or so) unbleached all-purpose flour
1 ½ ounces of white granulated sugar, plus more for sprinkling
2 teaspoons baking powder
½ teaspoon salt
10 tablespoons cold unsalted butter, cut into thin slices
4 fl. ounces of light cream (half-n-half)
1 egg
Zest of one orange
2.5 ounces of orange marmalade plus 1 tablespoon for glaze


Adjust oven rack to middle position and preheat to oven to 450 degrees Fahrenheit (230 Celsius). Line a heavy baking sheet with parchment paper and set aside.


Sift flour, sugar, salt, and baking powder into a large bowl. Rub the cold butter slices into the dry ingredients until the mixture resembles sand. I do this easiest with my fingertips, but you can also use a pastry cutter. 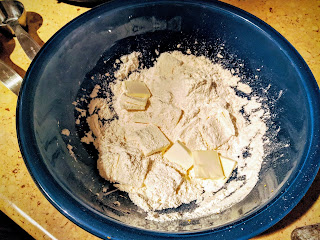 Mix in the toasted oatmeal and make a well in the center of the bowl.

In a large mixing cup, lightly beat the egg into the cream, along with the marmalade and orange zest. Reserve 1 tablespoon for glazing.

Pour in the liquid, and with a spatula, gently begin to fold the dry ingredients into the wet center, forming a craggy, soft dough. When the mixture can be gathered into a ball, gently lift it out of the bowl and put onto a well-floured surface. Sprinkle the top of the ball with more flour if necessary and gently work it in until the dough is soft but still a bit sticky.

Pat the dough into a circle, roughly 1.5 inches thick. Use a pizza wheel or large knife to cut the dough into 8 wedges. Transfer the wedges to the parchment-lined baking pan and glaze their surfaces with the remaining egg mixture. Sprinkle with a handful of granulated sugar. 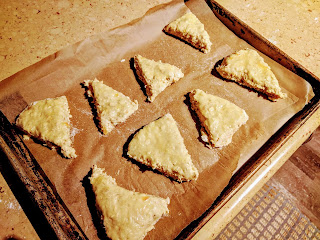 Bake 12-14 minutes until golden brown. Cool scones on the baking sheet on a wire rack until cool. They are best eaten the day they are made, but they freeze beautifully if well wrapped after they are thoroughly cold. 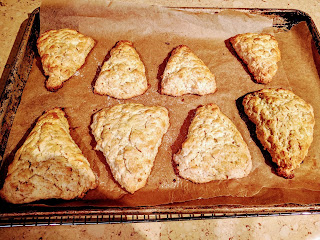