Fuel for the Day Ahead

We can thank the middle-class Victorians for the Full English/Scottish/Welsh/Irish Breakfast, also called a Fry-Up. The contention was that in order to fuel the body for a full day of industry and efficiency, it was essential to do more than sip coffee and eat a croissant, the habit that we now might call Continental. No, Victorians contended, the body needed to be much better fueled. Today, a generic Fry-Up will include eggs, meat, cereals, some fruit and vegetables, all washed down with tea or coffee. But the great thing about the Fry-Up is its wonderful regional variations. 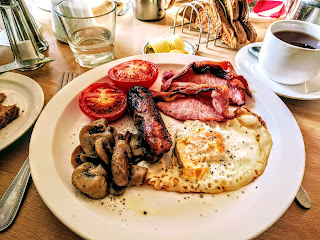 One of the best: The Full English at Telstar Bed and Breakfast, Exeter, England

An English Fry-Up usually starts with fruit juice and cold cereal, followed by fried eggs, bacon rashers (to Americans it resembles ham), bangers (sausage links), beans, grilled tomato and/or mushrooms, white or wheat toast, tea or coffee. In Scotland, the breakfast will often substitute porridge for cold cereal and add in black pudding, haggis, tattie scones (difficult to describe, but like a mix between a grilled thick flour tortilla and a potato pancake), and sometimes Lorne sausage (a square sausage of minced pork, beef, spices).  The Welsh version often adds a delicious fried laverbread-oatmeal patty instead of porridge, and/or cockles or smoked salmon. The Irish version, the most famous of which is the Ulster Fry-Up, comes with black and white puddings and soda bread. The great thing is that more and more restaurants are offering creative vegan and vegetarian versions of the Fry-Up, and also getting more creative with healthier versions of the traditional.

Two breakfasts really stand out for me this Saturday morning as I wish I were back in the Celtic nations.

Because I am in the business of trying a lot of different foods, I can only eat a Fry-Up early in the morning when I am going to be travelling all day or too busy with research to take a lunch break. The meal, as is obvious, is very filling.

One of those travel days happened when I was leaving North Berwick, Scotland, to travel far north. My Airbnb host, Lesley, wanted me to try her version of the Scottish Fry-Up, of which she is rightly proud. It just happens that Lesley's favorite black pudding, made by Anderson's Quality Butchers about half a kilometer from her house, won the coveted Scottish Black Pudding Championship this year, thus giving Scotland's most famous black pudding region, Stornoway, a run for its money.  "What about if you try them side by side and tell me which one you prefer?" Leslie asked enthusiastically.  I enthusiastically agreed.

Lesley sources much of her food locally, not just the black pudding. The eggs, bangers, haggis, and rashers are local, along with her tattie scones. When she brought in the meats to accompany my eggs --thankfully reassuring me that I did not need to eat it all--she pointed to Anderson's black pudding (to the left at the top in the photo, across from haggis), as well as a slice of Stornoway black pudding (at the bottom of photo). Undoubtedly, I thought Anderson's was fantastic because of its crumbly texture and distinctive spiciness. Lesley smiled and told me that three golf caddies who had lodged with her the week before also preferred Anderson’s black pudding to the Stornoway's. However, they were both delicious, and I hope if you travel to Scotland you give artisan black puddings a try. 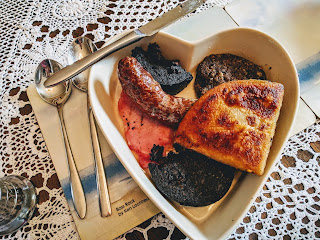 Thank goodness you are allowed to just pick and choose what you want when presented with a Fry-Up menu. Even when I leave off half the offerings, I am comfortably full the rest of the day.

Before I had arrived in Scotland, I had been staying for an extended period along Bae Ceredigion, Wales, including Aberystwyth, home to a lovely fish restaurant, Pysgoty.  The day I made my way there for breakfast was nothing short of an Atlantic squall, and as I clutched my raincoat around me and trudged forward, the waves were crashing over the seawall and the sky was a dark lead color.  It was that color that stands out in my mind because when Carys, the server at Pysgoty, set my breakfast down in front of me, the deep yellow of the scrambled eggs and the gorgeous burnt orange skin of the hot-smoked salmon literally light up that room, puncturing all that gray.  I think that I stared at the plate a full moment to soak in its sunlight rays before I tucked into its deliciousness. 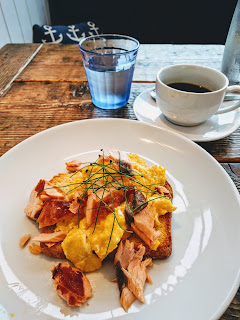 Like Leslie, Rhiannon and Craig, Pysgoty's owners, take seriously their commitment to using local sources, but this was no typical Fry-up, as much as I love those, too.  This was more delicate, dainty even, in spite of the filling nature of food in front of me. The eggs tasted as fresh-laid as they were, and they paired beautifully with the salmon, the best I had ever tasted, given its gorgeous flakiness and distinctive smoked flavour. New to brioche (the one time I attempted to make it was a failure) I was somewhat tentative about it, but I discovered quickly that its rich, butter taste and light texture did precisely what it should do: absorb beautifully the juices from the salmon.

The food filled my stomach and the colours filled my soul. I bundled up in my rain gear and headed back into the squall to spend the day researching at the Aberystwyth Public Library. I did not need to think about food until much later in the afternoon.

Even though we're more than a century away from the Victorians, their insistence on a full breakfast to fuel one for the work ahead still holds true, at least for me, and with each Celtic nation bringing its own interpretation to the meal, there are endless varieties and versions to choose from.

As the Welsh say, Mwynhewch eich bwyd, or Good Appetite!

Note: All blog posts and photos are the exclusive property of Andrea Broomfield and must be explicitly acknowledged as such.