Back in Time: Observations of Manx Life and Food, Part I 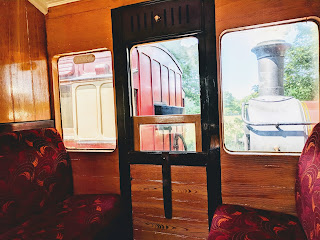 My inside compartment aboard the steam train, with a train going the other direction.


From the moment I boarded the Isle of Man Steam Railway for Colby, my home-away-from-home for the next ten days, I knew that I was stepping back in time. It’s a cliche, but I can’t think of a better way to describe my experience in Ellan Vannin, Manx for Isle of Man. Colby itself is a village, and it felt like the amalgamation of Angela Thirkell’s Barsetshire (albeit smaller) and Patrick Taylor’s Ballybucklebo. While cars did sometimes spedd by on the Main Road outside my bedroom window at my host’s cottage, and while I relied on the prosaic bus to get me to and from other places on the Isle of Man, the whistle blows from the close-by train station along with the train wheels’ chug-chug-chug were reminders that some people’s everyday life was not entirely contingent on high-tech modernity.

Take as an example my first ride on the Isle of Man Steam Railway. I boarded the train in Douglas (Doolish), the island’s capital town of 29,000. I was in no hurry to reach Colby, my destination, but because I was using this train for its original purpose--transport--and not for entertainment, I did ensure with the ticket agent that it was okay to bring my luggage on board. The train steamed up to the platform and I entered a carriage that seated six passengers, although I had it to myself on this journey. I closed my door, lowered my window by way of a thick leather strap, and settled in.


The weather was unusually dry, sunny, and by Manx standards, hot. However, for a Kansan accustomed to intense heat and humidity, I found it wonderful, and as the countryside went slowly by, my wide-open window let in a chorus of birdsong, lowing cattle, mooing sheep, and an occasional rooster crow. Suddenly, the train stopped. Without the puffing engine or churning wheels, I marveled at how the sounds of nature intensified. For some moments, I sat on my cushioned booth and soaked in the symphony. But curiosity got the best of me, as it did the other passengers, and so we all began to poke our heads out of the windows of our compartments to see what the trouble was. 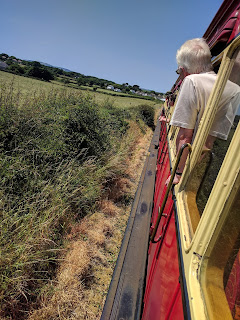 A small herd of cows edged closer to the tracks, the mothers clustering to watch the action while their calves, less interested, nonetheless stayed close by. Amusement gleamed in their soft brown eyes, and then, I learned why. One of their herd was standing in the middle of the track up ahead, her calf with her. Initially, only the conductor exited the train to try and shoo the two away, and initially they obliged, but when the train started puffing in anticipation of moving again, cow and calf returned to the tracks, this time with the mother literally settling down on them while her calf stood. Now the engineer joined the conductor to try and coax the two off the track, but to no avail. Meanwhile, the remaining herd might as well have been at the cinema watching the hilarity unfold, albeit they were happy enough chewing their cud instead of popcorn. 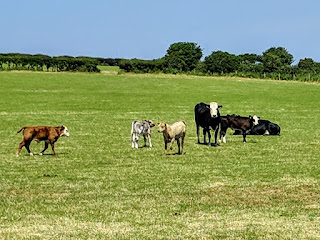 Because I was in last passenger car before the caboose, I was too far away to make out what the engineer and conductor were shouting at the cattle, but whatever it was was ineffective, and so we sat and waited. Passengers further up the line conveyed to those of us in the back what was transpiring so that we could all join in the drama. I’m sure that high-speed, technologically advanced rail systems have problems with obstructions on the track, but my sense is that those obstructions are few, and whatever they are are dispatched with quickly and efficiently (perhaps brutally). Not so, here. In this battle between man, beast, and machine, the beast was winning--and what I loved is that the two men in charge were not in a huge hurry to “fix” the problem. Eventually, the farmer himself showed up, explained that there must be a hole in his fence somewhere down the line, coaxed the cow and the calf off the track, and again, we were on our way. The train slowly started moving, and the herd lost interest and went back to the business of grazing.

Because I am on Ellan Vannin to understand its food traditions, it helps to see how closely connected animals remain to the humans who raise them. In my next posts, I will speak more to Manx food, but what I learned on this leisurely journey and in my subsequent days on the island is that there’s little distance between its inhabitants, and so the intricate web of subsistence--the food chain, if you will--is up close, and it’s personal. The cow and calf recognized their caregiver and agreed at his behest to return to the field, leaving the train free to go on its way. But that recognition struck me as important. While the Manx economy is now largely based on finance, much of its landmass is taken up with pasture and crops. With the island only 32 or so miles long and 14 miles wide with a land area of 221 square miles, people and crops and animals are literally in one another’s faces. Proximity breeds an intimate understanding of everyone’s needs and roles, and that understanding produces a harmony and a patience among creatures easily lost when food systems are massive, industrialized, and to my way of thinking, inhumane and unsustainable.

Note: all posts and photos are the exclusive property of Andrea Broomfield and must be explicitly acknowledged as such.
Labels: British and Celtic Cookery