The Way of a Welsh Cake

If you listen, food will tell you stories, of individuals, families, clans, regions, even nations. This fact of food always stops me in my tracks, particularly this week when I set out to do a straightforward blog post about Welsh Aberffraw cakes (teisen Aberffraw). I bought a scallop shell with the intention of shaping these biscuits, and once it arrived in the mail, I tricked myself into thinking that the only work involved for this post would be baking, taking some pictures, and writing a paragraph or two. Instead, I have been on a metaphorical journey, and along the way I have learned much about Celtic connections, food and otherwise.

Aberffraw cake goes by many names, each of which contribute to the story. In Welsh, Aberffraw is spelled Aberffro and is usually shortened to Berffro; hence Aberffraw cake is sometimes called Berffro cake. More importantly, it is also known as St. James cake (Cacen Iago). 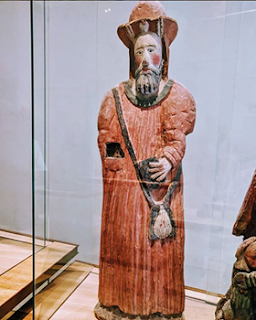 My first encounter with Cacen Iago or Aberffraw cake was in Bobby Freeman’s First Catch Your Peacock: A Book of Welsh Food. In reading about it, I thought of Scottish shortbread, in that both rely on a 3-2-1 ratio of flour, butter, and sugar. Add some egg and leavening, they become Palets breton. What makes the Welsh version stand out, however, is its distinctive shape: mold the dough by pressing it onto a scallop shell, release it, and you have a scalloped-shaped biscuit. Why the cakes are shaped as such is where the story grows as rich as the butter on which it is based.

Freeman explains that Cacen Iago, or James’ Cakes, are actually connected to Galicia, Spain, in that both Celtic nations share a common name for James: Iago, and both nations revere this fisherman disciple who crossed the Mediterranean to preach the Gospel in Spain. Welsh pilgrims en route for Santiago de Compostela in Galicia wore the scallop shell to honor St. James and to differentiate them from others. The shape of Cacen Iago thus acknowledges the Welsh pilgrims. 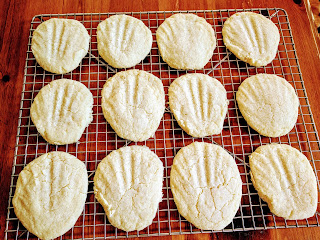 While that makes sense, I wasn’t satisfied with the connection of Aberffraw specifically with a pilgrim’s biscuit. From as far back as the 10th century (and likely earlier), thousands of Christians from all over Europe, not just the Isle of Anglesey (where Aberffraw is located) made the grueling journey to the Catedral de Santiago de Compostela where the remains of St. James are said to be buried. They too wore--and continue to wear--the scallop as a symbol of their pilgrimage. Why would Aberffraw exclusively be associated with a shell-shaped biscuit?

I have not established definitive answers to my questions, but the important thing is that my questions led me to a deeper respect of the numerous interconnections for Celtic foodways and culture. If you allow the food to tell a story, it will do so, if you care to listen.

One source regarding Aberffraw, Wales and its cake comes from the Aberffraw Biscuit Company, founded in 2013 by a Welsh husband and wife, James and Natasha Shepherd. They write that the biscuit can be traced back to the 13th century. The legend holds that a Welsh king’s wife was walking along the beach in Aberffraw while her husband was holding court. She found a beautiful scallop shell and requested a cake be made in the same form. 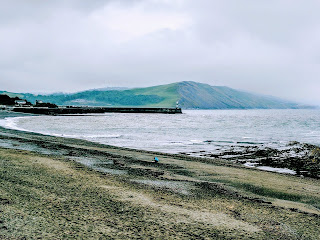 It makes sense. That area of Anglesey is known for its queen scallops (Chlamys opercularis). Furthermore, medieval Aberffraw was the principal seat for the Kingdom of Gwynedd’s “second dynasty, where the Kings of Gwynedd held court from the 7th century until 1282 when Edward I of England defeated Llywelyn Ap Gruffudd, the last native ruler of Gwynedd. And so, if a queen walked on the beach and found a scallop shell and liked it enough to request a baker to fashion a cake in its shape, why not?
However, the Shepherds and other food historians like Bobby Freeman point to a more likely origin, and that takes us back to The Way of Saint James, or the Camino de Santiago, as it is widely known today. According to Celtic Culture: A Historical Encyclopedia, Aberffraw is home to a 12th century church (St. Beuno’s, I believe) that was built under the patronage of either King Gruffudd ap Cynan (1075-1137) or his son and successor, Owain Gwynedd (1137-70). The church’s Romanesque features resemble those of 12th-century churches along the Camino. The cake dates from the same century and place as the church.
I do not know if these two famous Welsh kings and patrons of the Aberffraw church made the pilgrimage to Santiago de Compostela themselves, but Gwynedd was a powerful international and cultural site, part of an ancient oceanic “super highway” that connected Celtic realms, including Wales and Santiago de Compostela as well as the rest of Gallaecia and Astures.

Finally, the scallop shell and its connections to St. James tells another part of the story, one rendered beautifully by my dear friend and co-author, Beebe Bahrami in The Spiritual Traveler: Spain : a Guide to Sacred Sites and Pilgrim Routes, which I urge you to seek out.

Suffice it to say that a mere biscuit is hardly a mere biscuit. So much is wrapped up in a name, a shape, the ingredients, and a place, as the Cacen Iago suggests. If you have more to add or corrections to make, please don’t hesitate to let me know. Until then, why not make a batch for yourself? Here’s a terrific video, "Aberffraw Cakes with Tilly" that gives the details and technique: https://www.therecipehunters.com/aberffrawcakes

Note: All blog posts, including photos, are the exclusive property of Andrea Broomfield and must be explicitly acknowledged as such.