Romanelli Grill was Kansas City’s Cheers; a pub where everyone knew everyone’s name, and where people of all walks of life intermixed.  A “modest country club” was another way to describe Romanelli, wrote journalist Joel Laner. Charles Ferruzza added that Romanelli’s country club atmosphere resulted from its “unexpected gentility. . . . Good manners prevail in a setting where everyone seems to know each other.”

Typical diner food predominated, with grilled and fried specialties the norm, but what added character was that “cosmopolitan patrons can have their fried catfish, spaghetti red, or cheeseburger with a Manhattan or a glass of Chardonnay,” reporter Joel Laner wrote.

When it opened in 1935 or 36 (accounts vary), Romanelli did what countless other eateries did during the Great Depression: it billed itself more or less as a barbecue restaurant, offering cheap, filling, delicious smoked meats on bread. Along with “tasty sandwiches and barbecue,” Romanelli also featured a daily “blue plate special.” As economic troubles and wartime food shortages finally eased in the late 1940s, steaks, fish, and seafood cocktails enhanced the modest menu. 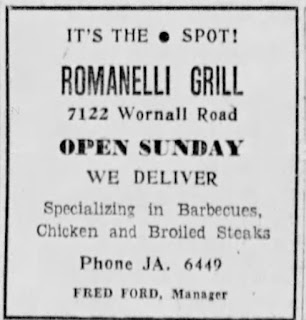 Romanelli’s first owner has been lost in obscurity, but its second owner was Ralph A. Bowers, Sr. who bought it in 1939. Diners and cafes downplayed ownership and chefs. Instead they promoted convenience and prices for the surrounding neighborhoods on which they drew, and Romanelli was no exception. Its name came from the surrounding neighborhood, a 1920s J.C. Nichols development called Romanelli Gardens and its small strip of commerce, the Romanelli Shops. 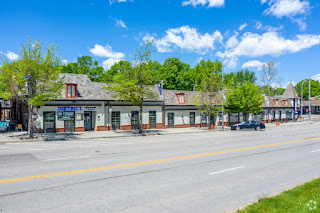 The space consisted of two rooms totaling 8100 square feet. One included a distinctive horseshoe bar. While diners today take bar televisions for granted, Romanelli purportedly was the first in Kansas City to offer one, announcing the addition in a July, 1949 Star advertisement. Most certainly that was a draw, but the adjoining dining room with its close-together unadorned tables and booths allowed diners to make their own entertainment through banter and laughter, 11:00-11:00, Monday through Saturday.

Ralph A. Bowers, Sr., Fred Ford, Leo Ambrose Marquardt, and Andrew B. Anderson, DDS, all had partial or full ownerships of Romanelli Grill, but the two owners most associated with the establishment were and his son, Joseph McCabe, Jr., who assumed control when his father passed away in 1994. Joe McCabe Sr. came to the helm in 1963 and oversaw what was another Romanelli stroke of genius in addition to a bar television--adding catfish to the menu.

Ronanelli’s fried chicken was also highly regarded, but catfish became the star attraction. Meredith Ann Kopulos told the story in a Star Magazine feature in 2003. Kopulos’s dad sold fish, and one day he was sitting at the  Romanelli bar when he suggested to McCabe that he should add farm-raised catfish to the menu. It was still a novelty in Kansas City, and since most people associated catfish with muddy bottom feeders, McCabe was uninterested. Shortly thereafter, Kopulos’s father came in again, this time carrying his wares. Joe McCabe Jr. noted that his dad was “a nice guy,” and so not wanting to upset his fish salesman-regular, McCabe Sr. went ahead and purchased four or five of the catfish, not expecting them to sell. What helped changed his mind was how delicious they tasted when the fish salesman donned an apron and headed right into the restaurant kitchen to fry them up. The sweet, flaky fish was a revelation to McCabe, and shortly thereafter the head cook devised a delicious cornmeal dredging before the fish hit the oil.

“It was my dad’s most memorable, and talked about, sale,” recalled Kopulos, and ever since, Romanelli’s was known as “the Holy Grail of catfish.” Restaurant reviewers and patrons alike consistently praised its quality. Charles Ferruzza gave mouth-watering detail in his 2002 Pitch review: “There’s no dish less complicated than Romanelli’s best-selling fried catfish. It’s just the whole whiskered fish, breaded and pitched into a deep fryer until the crust is sizzling and the flesh is firm and flaky.” 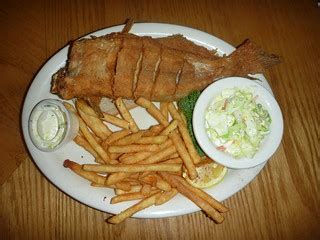 While the photo is Matt Johnson's (care of Creative Commons) it resembles how Romanelli prepared catfish. The entire fish went into the fryer, and a waiter would debone the fish at the table. Patrons could opt to keep the tail or have it removed.

Aside from McCabe adding catfish, much of the menu remained unchanged throughout the decades, with ribs, fried chicken, cheeseburgers, sandwiches, and the Spencer Steak (a small thin-cut steak) popular entries, while the delicately breaded fresh-cut onion rings were the most highly regarded side.

Inevitably the neighborhoods and commerce along Wornall Road began to change in the late 1990s. While longtime patrons of the Romanelli Grill saw it as an integral part of their routines and community, it struggled to attract younger customers necessary “to keep the restaurant going into the next generation,” wrote Star reporter Joyce Smith. True--Charles Ferruzza pointed out--, “I have younger friends who like to eat there because it’s inexpensive and so tragically unhip that it’s a comfortable antidote to the new, chic bistros popping up all over town”--but by 2005, McCabe Jr. was ready to retire. He sold the majority interest to James O’Brien and Ray Dunlea who revamped the space and opened the Irish-inspired The Gaf. Today, District Pour House + Kitchen occupies that venerable corner.

Romanelli Grill exemplified how the most iconic eateries encompassed so much more than the food. In this case, regulars were so thoroughly familiar and comfortable that the grill was an extension of their homes. Bill Grady recalled how on Saturday mornings, “management would let the regulars cook their own breakfast--I attended several times--great neighborhood joint--I miss it.” No wonder, Bill, no wonder.

This post is the sole property of Andrea Broomfield who must be acknowledged for any information borrowed.
Labels: Kansas City's Lost & Iconic Restaurants 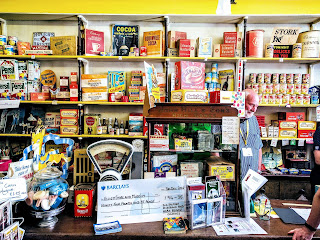