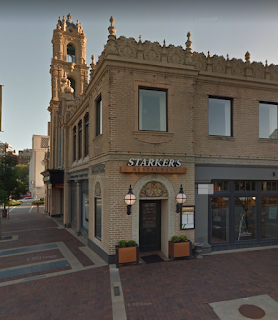 The final address for Starker's, on the Country Club Plaza, circa 2011
Harry Starker’s forty-year reign helped shift Kansas City’s understanding of fine dining away from formal French-Continental restaurants and towards more relaxed, eclectic creations that spoke to chefs’ creativity.
Starker’s owner, Cliff Bath, graduated from Gilbert/Robinson’s management training and carried into his restaurant that G/R esprit de corps, naming his establishment for an English fifteenth-century gourmand with a penchant for drinking and riding his horse naked (hence the term “stark naked”). Patrons could relax but still expect high-quality food in smart surroundings.
Significantly, Harry Starker’s introduced many Kansas City diners to fine wine, given Bath’s Sonoma background and desire to share his oenophile knowledge. When Bath’s executive chef, John McClure, bought the restaurant in 2004, he kept its reputation for wine but infused it with his own culinary philosophies, ones still carried on in our city’s best restaurants.
Harry Starker’s opened at 4708 Wyandotte, taking over the former Trail House restaurant space. Dark wood paneling and British paintings as well as British artifacts made it feel like a “posh London tavern,” noted authors of _Dining In--Kansas City_. Harry Starker’s most distinctive visual was its “spectacular beveled stained-glass dome,” recalled Charles Ferruzza in a September 2013 Pitch article. 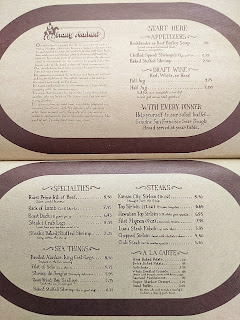 Nonetheless, as Cliff Bath explained to reporter Jan Paschal, restaurant interiors usually have to be remodeled after seven years because of both “a lot of wear and tear. And things change fast, too,” he added. By 1980, the restaurant closed so that Bath could expand to include a second-floor lounge with the bar a split-level affair between the dining room and the lounge.
Essentially, Harry Starker's became a duplex, wrote Charles Ferruzza, with two addresses/entrances: 4708 Wyandotte for the ground floor restaurant and 200 Nichols Road around the corner for access to a lounge with a dance floor and live music.
Early chefs like Bob Palmgren and Jerald Rhae kept the menu relatively conservative, sticking primarily to steaks and seafood. Nothing, however, was left to chance. Bookbinder Soup (recalling the famous Philadelphia seafood restaurant) was praised for its mingling of red snapper in a rich sherry-accented beef broth. When chicken fingers became the rage, Rhae elevated it by egg-washing chicken tenders, coating them in panko and sesame seeds, sautéing them, and serving them with an apricot, peach, and plum dipping sauce accented with Sichuan peppercorns. Diners swooned. 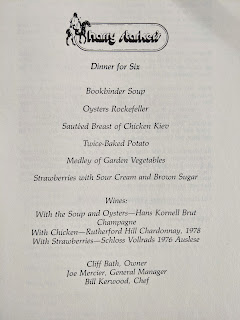 A suggested menu in Boots Mathews and James Rieger's Dining In--Kansas City, a compilation of recipes and short histories of Kansas City's iconic restaurants, 1980
All the while, Cliff Bath, with the help of nephew Bob Bath and general manager, Joe Mercier, and later Stephen Molloy, concentrated on wine. Cliff Bath again remodeled the upstairs space in 1987 to create Starker’s Private Reserve, “known for its white-glove service, large wine collection and contemporary Continental cuisine,” reported Carolyn Walkup in the industry magazine, _Nation’s Restaurant News_. 135 labels grew to 12,000 by 1992, the year that the restaurant received its first of thirteen consecutive Wine Spectator’s Grand Awards for one of the “Best 100 Wine Lists in the World”-- equitable to a coveted Michelin star.
When the J.C. Nichols Company refused to renew Bath’s lease at the end of 1996 for the ground floor part of his restaurant, Bath focused exclusively on his upstairs Private Reserve, doubling it to nearly 5,000 square feet to allow for some public dining in the evenings, as well as the ongoing private dinners.
Here was where Kansas City elite entertained out-of-town VIPs and dined to impress their friends. With now over 17,000 wine bottles to choose from and with strikingly original dishes such as grilled filet of ostrich over cracked peppercorn and chipotle chili sauce, guests soaked in the ambiance and relished the sophistication and warmth.
By the early 2000s, fine dining in Kansas City was defined by restaurants like Starker’s Private Reserve, and by what then evolved into Starker’s Restaurant. It went under the control of chef-owner John McClure who bought the restaurant in 2006 when Bath retired and returned to Sonoma.
Starker’s Restaurant moved to 201 W 47th Street and McClure paid homage to Bath and the original Harry Starker’s by keeping favorites like Bookbinder’s Soup and championing wine. The chef’s distinctive cuisine reflected all facets of his rich and varied experiences, starting with his upbringing as a fourth-generation Kansas farmer-rancher where he watched beans, okra, and zucchini grow when his mother put him in his car seat to hoe her garden, wrote Kansas City Star reporter Anne Brockhoff in a 2011 profile of the chef.
Buzzwords like “seasonal” and “local” and “sustainable” are partly the result of McClure’s regard for working with local farmers and what they harvested, rather than relying on big restaurant supply chains. He, along with chef Steve Cole of Café Allegro championed menus that adhered to the city’s love of homey dishes like a plate of warm cookies, and also distinctly seasonal treats like strawberry-rhubarb compote spooned over a salad of foie gras, strawberries and pistachios.
When this brilliant and talented young chef took his own life on October 19, 2011, the city, not to mention Bath’s family, reacted with a sorrow and shock that continues to reverberate through the culinary community, causing fierce soul-searching and renewal of commitment to detecting and treating those in the industry who silently suffer from the depression and related illnesses that a high-stakes restaurant inevitably brings.
While his family tried for a short time to keep Starker’s running, the tragedy and loss was too great, and one of the Plaza’s last independently owned restaurants shut its doors in 2013.
Kansas City’s wine expert Doug Frost best articulated what Starker’s Restaurant was when McClure was at the helm: “Smart but never arch. His culinary touch is always more informed than idiosyncratic, more disciplined than it is wild . . . . each of his dishes is pleasing in an elegant manner.”
Such a philosophy exemplifies the very best Kansas City cuisine, one that both inspires and informs chefs who remember McClure and all that he stood for.
This post is the exclusive property of Andrea Broomfield and must be acknowledged for any borrowing of material.
Labels: Kansas City's Lost & Iconic Restaurants 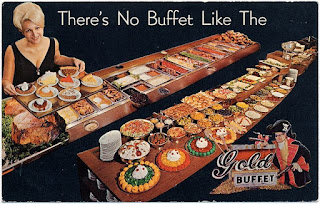