If Kansas Citians have come to expect that a “Mexican restaurant” means large platters of food covered with that “Tex-Mex trinity” of cheese, lettuce, and tomatoes, it might be because of Patricio’s, a south Kansas City institution. Here, many Baby Boomers experienced their first taste of enchiladas or tostadas, and sipped their first margaritas.

Owners, Lawrence “Pat” and Ruth Moran, started their restaurant in the Marlborough neighborhood at 8026 Paseo  in 1971. The food was so delicious and portions so huge that its popularity spread by word of mouth, and the place became routinely packed. Gretchen Kalbac on Facebook’s Kansas City Memories, particularly remembered the lure of the tostadas. “They were “6 inches high and fantastic,” she recalled. Alexis Harmon agreed, “Yes, their tostadas were tiered ridiculously high!”

The Morans were known for their generous personalities and saw their generous platters of tacos, taco salads, burritos, and enchiladas as an extension of themselves. Patricio was a family affair, and the kids put in their time working shifts when waitstaff and prep cooks called in sick. The Morans also relied on their home kitchen where they made their various seasonings, recalled Kansas City Star restaurant critic Art Siemering in 1983. 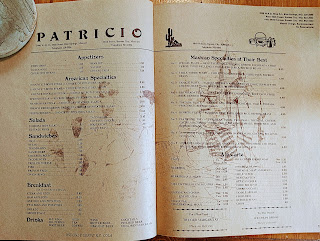 The menu is from 1976 Menu Guide to Kansas City. A Bean Tostada by itself could easily feed a person, but many loved Mexican Specialty No. 1 with a beef cago, small tostada, cheese enchilada, chile verde, chile relleno, tamale, fried rice, and refried beans. Photo courtesy of Andrea Broomfield

The restaurant’s popularity convinced the Morans to expand, and by 1976, three Patricios were in operation, including one at 9849 Holmes. By 1979, the Morans downsized, concentrating their attention on the Holmes location exclusively. 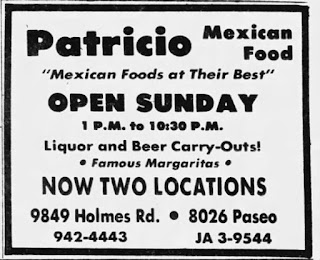 An advertisement that appeared regularly in 1974.

Seating 200 patrons, Patricio’s was one large room with Spanish wrought iron chairs and a Spanish décor accented by a brown brick floor and orange wall carpets. “There is also a small bar and a juke box that plays mostly country western music” wrote the Clarendons in their 1982 Guide to Kansas City Restaurants.

By 1978 when Star entertainment editor Shifra Stein went on a hunt for the city’s best margaritas, the drink had become commonplace around the Metro. Most were concoctions of cheap sugary mixes and cheap tequila, and finding a great one took effort. Stein gave top marks to Patricio, claiming that “it still makes the best in town . . . . Of all the Margaritas I have tried, it is the smoothest and most deadly.” Made of Arandas tequila, triple sec and lime juice, a pitcher serving eight drinks sold for $13.50 in 1978. Combined with the party-like atmosphere and great food, the margarita made Patricio one of Kansas City’s most popular restaurants. 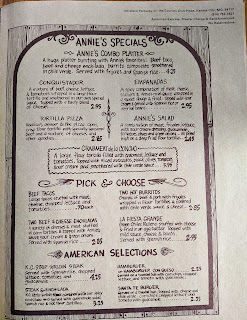 Inevitably, Patricio’s lost its novelty, and with so much competition, the food was sometimes judged not as novel or generous, but bland and conservative, dominated by cheese and inauthentic “Tex-Mex” impulses. Not helping matters was the decline of Holmes Road. The restaurant’s closure was likely the result of Pat Moran and his son, Larry, deciding that they could no longer fight the crime. Three weekends in a row in July and August, 1992, Patricio’s was robbed, one time with gunshots and injuries. Although the Morans hired a security guard, the restaurant lost most of its lunch business, and people tended to avoid it after dark as well.

Shortly thereafter, the Morans sold their beloved restaurant, and it became Patrikio’s Mexican Restaurant. Although it lasted until 2011, it was nothing but a ghost of its former self, serving largely to remind patrons of what they had lost. For some years, the building stood abandoned, and currently, nothing remains but an empty lot.