A roadhouse: designed to help travelers on their journeys, and as the automobile caught on for transportation--and recreation--the roadhouse often became a place where city folk fed up with laws and red tape, conformity and dullness, could escape for an evening of “letting their hair down”, so to speak. While the vestiges of Helen Stroud do live on in Kansas City at Stroud’s North, Kansas City’s oldest surviving roadhouse was the Bamboo Hut at 40 Highway and Pittman Road. For 68 years, it consistently served great food at astonishingly modest prices while serving up rounds of stiff drinks and offering diners tire-sized ashtrays.

Roadhouses back in the day often had a questionable reputation, existing as they did along highways in areas where jurisdictions were vague. Who, in other words, was responsible for overseeing law and order? The first advertisement for the tavern appeared in the Kansas City Times in February, 1942, but within six months, it had its first big brush with the law when it was raided by the Independence division of Jackson County law enforcement (the property being technically two and a half miles east of Kansas City limits). The Independence deputy sheriff had been observing the tavern for some time due to frequent disturbances, and when a brawl broke out in February, the raid apparently shut down the premises, run initially by Tony Travalanti and Willie Buffa.

When the Bamboo Hut reopened shortly after the raid, Carol Roberts had replaced Travalanti and Buffa as the presumed owner, announcing in the Kansas City Times that her establishment would feature chicken and sandwiches. It went without saying that accompanying the meals and snacks would be ice-cold beer and cocktails.

What did “Bamboo” have to do with this roadhouse let alone “Hut”?  Even before the tiki rage of post-World-War Two America started in earnest, the owners had outfitted the inside booths to resemble small huts with “grass” roofs over the booths to give it a tropical feel. Plastic palm trees added extra tropical effect. Bamboo Hut’s exotic name and interiors made it stand out, even though the outside of the building was modest, squat, and aside from its large red neon sign, unassuming.

When not being cited for fights and liquor violations, the roadhouse was the scene of robberies, and in one case, a bomb explosion shortly after midnight on New Years Day in 1954 when an “unidentified patron was said to have received cuts on a leg” due to the explosion of a small bomb.

But such incidents really did not matter to owners and an increasing number of patrons who likely felt that the Bamboo Hut kept a small bit of Kansas City’s old “Paris of the Plains” reputation alive. Most nights of the week the little tavern was a great place for regulars to drink and dance, and most importantly, eat, thanks to longtime cook, Bernice E. Phillips (1922-2012) who spent most of her life behind the stove.

While it initially started as a fried chicken and steak restaurant, inconsistent meat shortages and rationing that defined the later years of World War Two put it firmly in the fried-chicken-in-a-basket and barbecue camp. By the time that prosperity returned, so too, did juicy steaks doused with garlic butter and served on metal platters so hot that the food arrived to the table madly sizzling. 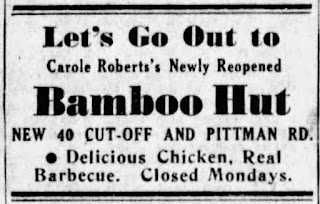 As time went on and many restaurants succumbed to various dining fads and trends, the Bamboo Hut also became appreciated for its adherence to foods that older generations of modest Kansas Citians adored and craved. As Interstates overtook the old highways, the Bamboo Hut saw its reputation enhanced as a destination for people searching for such delicacies as lamb and chicken fries (testicles), whole fried catfish, frog legs, and cocktails that had not yet returned to Kansas City as fashionable “retro” libations.

It is fair to suggest that the Bamboo Hut became for owners, staff, and patrons alike a second home. When James Elbert (Jim) Holler returned from the Korean War and married Patricia A. (Pat) Phillips, the two bought the Bamboo Hut around 1965 and owned it for a number of years. Many of their own family members worked and dined at the Bamboo Hut as well, garnering mentions in both the Hollers’ obituaries. Jeanne Craig was not part of the Holler family, but she loved working there when a job change brought her to Independence, and when the Hollers decided to move to Las Vegas, Jeanne and her husband, Charles Robert Craig, Sr. bought it from the Hollers and continued the old traditions with Bernice still commanding the stove.

The Bamboo Hut was the victim of a serious fire in 1980, and at that point, it was clear that the tiki theme was no longer viable given that the inside décor made the fire blaze all the brighter. Likely to keep the remodel costs minimal, the décor changed from South Pacific to “1960s rec room,” as Ferruzza described it in his 24 February, 2005 KC Pitch article. “The walls are paneled in dark wood, the tables are draped in burgundy vinyl, and wall sconces are outfitted with little orange flickering light bulbs.” Ferruzza was genuinely pleased with the addition of televisions that made patrons feel like they were “eating dinner in their parents’ basements.” The food, Ferruzza continued, remained delicious, and the cocktails remained stiff. The prices remained modest for the quality, with an 8-ounce strip, salad, garlic toast, and a baked potato coming in at less than “8 gallons of gas,” Ferruzza wrote. The most expensive offering was a seafood platter loaded with fried shrimp, catfish, and frog legs, accompanied by a salad with a liberal dressing of homemade ranch dressing. “At the Bamboo Hut, smoking and cholesterol have never gone out of style.” 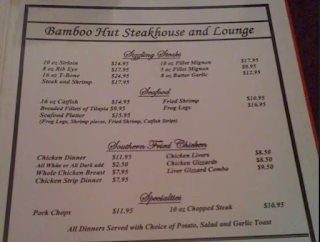 But all good things must come to an end, and eventually, as ordinances outlawed smoking in public areas and even, alas, cholesterol likewise went out of  style, Kansas City’s oldest roadhouse ultimately closed in 2010. Kansas City author and restaurateur, Lou Jane Temple best summed up why and how the Bamboo Hut became a Kansas City Icon: "It was like a time machine -- with food. . . . And it was so out there -- you never knew anyone but a select group of very cool people who would ever confess to eating there -- it was a great place for a romantic assignation. I never ever went there with anyone I was married to at the time." We’ll let it all stand at that.