My rendition of Beef Olives, a recipe that dates from Worcester, 18th Century as dictated in White’s 1932 Good Things in England. Every bit as delicious now as then. (Recipe below)

Undeterred by setbacks and finances, Florence White launched the English Folk Cookery Association (EFCA) in 1928. In its early years before membership numbers swelled, White ruefully confessed that “English cookery was so much under a cloud that people might have paid a subscription to keep out of it!” (p. 318). Slowly, however, White did grow the EFCA’s membership to the point that by 1932, the EFCA’s chairman was Allan Gomme with his wife, Lady Gomme, acting as president. St. John Wright was secretary. The owner of a Devonshire hotel, The Round House, Wright promoted several English specialties, including West Riding oatcake or riddle bread, Suffolk sweet cured ham, sweet pickled peaches, Ringwood fruit-cake (made by Mrs. Pitt of St Mary’s Care, Ringwood), Cumberland rum butter, rum-flavoured cherry jam, as well as local Devonshire and Cornish delicacies (p. 319).

St.John Wright was also associated with several luxury London hotel restaurants, including the Savoy, Claridge’s, Berkeley, and most importantly, Simpson’s in the Strand where he organized English Folk Cookery dinners that “were a great success,” wrote White (p. 319).

(For more information on these dinners, please see this article in The Countryman: https://archive.org/details/in.ernet.dli.2015.32250/page/n205)

The work of numerous EFCA recruits helped White produce a gastronomic map of England “on which the names of six hundred specialties were printed” (p. 320). Continuing to use the Times as her conduit, White offered readers the address of a West Riding oatcake baker and the address of a baker in Surrey producing manchets. White asked if in return, readers would provide her with the names of local specialties of their areas. The request resulted in “three hundred replies asking for addresses” of the two bakers, but sadly few sent any information on local specialties in return (p. 320). 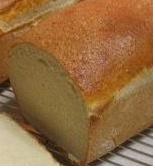 
An early user of the radio to promote English cookery, White turned her attention to that medium as well as print journalism. She gave a “weekly series of six broadcasts on old English dishes--the first given in England.” One of them, on North of England oatcakes, provoked an Edinburgh woman to follow with her own series regarding Scottish dishes. “She said I had stolen her thunder; she had never heard of North of England oatcakes!” White recalled (p. 320). Whether the Edinburgh woman ever did follow up is unknown to me, but White’s information on oatcakes did result in Dorthy Hartley responding to White’s inquiry with further information regarding the West Riding oatcake. Hartley went on, as many readers will know, to become one of the most authoritative Engish food historians, with her classic Food in England published in 1954. Likewise, a Mrs. Marshal of Skelwith Fold in the Lake District also responded to White’s inquiry, remembering that when she was “a child sixty odd years ago,” she had observed oat cakes made by “the father of the present baker, Mr. Leach” (qtd. In White, p. 320).


Entranced with these threads of a food’s lineage, White recalled her own follow-up research thusly in Good Things in England: “Famous housekeepers, now grandmothers and great-grandmothers, have told stories of seeing oatcakes baked on the ‘bak’ ston’ in the West Riding of Yorkshire by men whose grandsons are making and baking them in much the same way to-day” (“General Introduction,” Good Things in England, 1932). 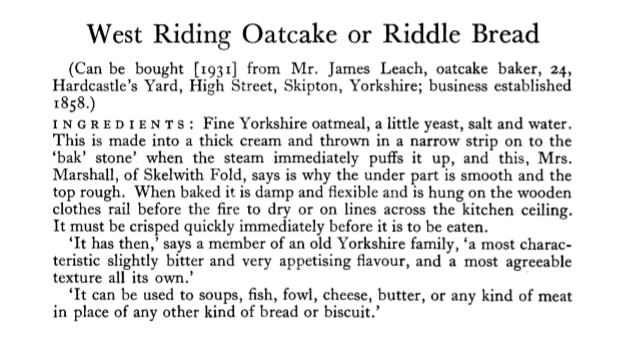 So obscure were many of the dishes White uncovered that even people who lived in the vicinity of their origins were surprised to learn of their existence, or the similarities of those dishes to ones from their own immediate village or hamlet.

The idea of collecting all of the recipes and stories that White received into a volume came from Mr. Hamish Miles. White took Miles’ advice, approaching Wren Howard, director of Jonathan Cape Ltd about the idea. She was duly commissioned to prepare a manuscript by 1 Jan. 1932.

A fortnight before the manuscript was due, White’s beloved brother Herbert, whose consistent financial allowance had in part made White’s research possible, passed away to her obviously deep regret and sadness.

Good Things in England was published on May 23, 1932 and honored with a leading article in the Times. It “at once took its place as a classic,” White wrote. “There isn’t another book like it, but I never consider it mine. It is England’s. Over one thousand English men and women contributed recipes and information”, as well as a number of contributions from Ireland, Wales, Scotland, and Cornwall (p. 321). In all, Good Things in England included 853 recipes, “and a mass of information” (321).

Predictably, White and the EFCA also had other irons in the fire equally essential to reestablishing the good reputation of British food, including the publication, also in 1932, of an 82-page Good Food Register and an expanded version in 1935. Both were designed to help motorists locate the best places to eat British food. The success of these Registers led in 1936 to the publication of Where to Eat or Put up in England, Wales, Scotland, and Ireland (Practical Press Ltd). Sadly, copies of these books are extremely rare.

Financially, White’s progress and publications did not bring her much financial comfort. Dire straits led her in 1934 to sell her precious culinary library to a friend who nonetheless allowed White to continue to use the books. Had more people been supportive of White’s efforts, perhaps she would have seen more books published, better royalties from those that did come out, and lucrative speaking engagements. But as White pointed out, her struggle was never-ending: “The English Folk Cookery Association has had to fight for every inch of standing ground in its own country, simply because so many English men and women will praise anything foreign instead of supporting England’s own products” (p. 322).

Imposing a method or review that predated the Good Food Guide’s own rules, the English Folk Cookery Association’s Good Food Register reviewers “shall never accept a penny in any shape or form for any recommendations it may give. . . . At present [the value of our recommendations] stand very high, and to be recommended by the English Folk Cookery Association is a coveted honour which cannot be bought” (p. 324).

Florence White completed A Fire in the Kitchen at age 74. Both memoir and life’s work were heavily influenced by White’s adherence to the Christian precept to serve others. As she stated simply in her Epilogue, “There is no higher rule of life than Ich dien, ‘I serve.’ It is on a level with Christ’s words, ‘I am amongst you as one who serveth.’” (p. 333).


My own experience reading and cooking from White’s Good Things in England has been some of the most fulfilling. As editor and compiler, White herself is largely absent, allowing the voices of oftentimes elderly women and men to preface a wealth of recipes, some obscure, others less so. White’s formidable knowledge largely shows up in how she is able to take a recipe--for example, a British classic, “Beef Olives”--and offer ancient interpretations alongside more modern interpretations, particularly in regards to changing kitchen technologies and availability of ingredients. That the recipes work is an added benefit, given that one might rightly expect that their value is strictly in the historical record of British gastronomy.

While no one has republished A Fire in the Kitchen, it is easy to find copies of Good Things in England. Persephone Books brought out a new edition in 1999, and the article below offers a review as well as some well-loved British recipes.
https://www.theguardian.com/lifeandstyle/2010/aug/12/ofm-50-good-things-england

Make a forcemeat with the crumbs, parsley, fat, anchovies, lemon juice and zest. Season well with salt and pepper. If the forcemeat is too dry and crumbly, add one egg to create a paste.

Lay a strip of the forcemeat on each piece of meat and spread out from end to end, side to side, leaving a border along the sides. Roll up and tie with string.

Put the dripping in a large frying pan and when hot brown the meat rolls on both sides.

Remove the meat rolls to a shallow baking dish.

Drain all but 2 tablespoons fat from the pan. Saute the shallot, onion, or leek until soft. Stir in flour and brown it lightly.

Add the wine and stock, whisking to avoid lumps. When the gravy bubbling, test for seasoning, adding salt and pepper and herbs of choice, such as thyme sprigs and a bay leaf. Pour gravy over the beef rolls.  Cover tightly with foil. Bake in a 300F oven for 2 hours or until very tender. Serve with roasted potatoes.