This semester, I signed up to take Culinary Nutrition at our college’s Hospitality Culinary Academy, and I’m committed not only to becoming more knowledgeable about nutrition, but using our labs as an opportunity to bake my favorite Celtic classics in healthier versions. Sure enough, this week the focus was on carbohydrates, fruit, vegetables, and fiber, and when asked for the ingredients for my upcoming bake, I immediately said, “oranges, lemons, walnuts, and dried cranberries.”

I had in mind a 1950 Pillsbury Bake-Off Grand-Prize winning cake, “Orange Kiss-Me”, created by Lily Wuebel from Redwood, California. The cake had caught my imagination some time earlier because an entire orange is literally ground up in the cake--peel, pith, and all--along with toasted ground walnuts. I knew that this cake would meet the chef’s specifications for fiber and fruit.

As all-American as the Pillsbury Bake-Off might be, Lily Wuebel’s recipe shouted “Scotland” to me, given the intense orange marmalade flavor that would surely result if I used peel as well as fruit. Scotland’s long-time love affair with citrus dates back at least as far as the arrival of the Dutch East India Company, whose merchants brought in through Scottish port loads of spices and dried fruit that were cheaper for Scots to afford than for the English, according to Annette Hope in A Caledonian Feast. Some time later, Dundee became associated with orange marmalade and remains so today, as many of my readers already know. Mackays is one of the best-known producers of this breakfast staple.

The story of Dundee marmalade as told on the Mackays Company website starts with a Spanish ship loaded with Seville oranges that took refuge in the Dundee harbor during a storm. A local grocer purchased the oranges, but finding them too bitter, the grocer’s wife thought to boil them up with sugar in order to create a marmalade. It was a success.

The British in general--not just the Scots-- have always loved the sweet-sour-bitter flavors of citrus, and lemon drizzle and orange drizzle cakes (what Lily Wuebel’s Kiss-Me Cake reminds me of) are on just about every county fete day tea table that I observed in my travels through all the Atlantic Celtic nations. 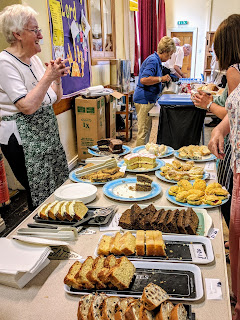 And so on a snowy cold day I practiced for my upcoming culinary nutrition lab, making the Kiss-Me Orange cake but with my own personal touches. Instead of using the golden raisins called for, I substituted a cup of Trader Joe’s orange-accented dried cranberries, with fantastic results. However, I still thought the cake would be improved by adding just a bit of sour citrus edge, and so I practiced again, using a bit of lemon juice and zest in the drizzle. On the day of the lab, my cake was devoured, and so I would call it a smashing success! This cake is easy, remarkably moist, and from a health standpoint, it includes a good amount of fiber due to the entire orange being used along with almost a cup of ground walnuts. Nuts also replace some of the gluten, making the cake--in one of the student’s opinion, “healthy enough for breakfast!”

Sift the flour, salt, and baking soda into a small bowl.

Pulse 1 cup of sugar and walnuts in a food processor or blender until the walnuts are coarsely ground. Transfer ⅓ cup of the sugar- walnut mixture to the small bowl with the grated zest. Stir to combine and set aside.

Add cranberries and orange rinds to the food processor or blender along with the remaining walnuts and sugar, and grind until a thick paste forms.

In a mixer with the paddle attachment, cream the butter until fluffy. Add in the orange-cranberry-walnut paste and continue beating. Scrape down sides of the bowl, and then add each egg, one at a time. With the mixer on low, slowly add in the milk. When combined, add the flour and beat on low until just combined.

Pour the batter into the greased baking dish and smooth top with a rubber spatula. Bake 30-35 minutes or until a toothpick inserted in the center comes out clean.

While the cake is baking, make the drizzle: Combine the zest, orange and lemon strips, 2 remaining tablespoons of sugar, and the orange and lemon juice in a saucepan. Bring to a simmer, and cook until syrupy, swirling the pan occasionally. Reduce to ¼ cup and discard the rinds.

When the cake comes out of the oven, poke it all over with the toothpick, and then drizzle on the orange-lemon syrup. After the cake has cooled slightly, and the drizzle has seeped in, sprinkle on the walnut-orange-lemon zest mixture.
The cake is ready to cut into after about 2 hours. The orange flavor intensifies as it cools, so avoid the temptation to immediately dig in. Tightly covered, this cake improves with age for up to 3-4 days after baking.