Connecting the Celtic Dots through Baking 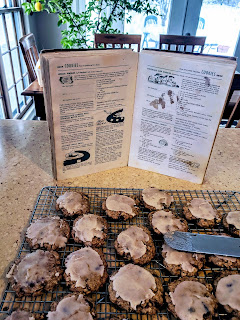 Tasked by a colleague and fellow Master Teachers Workshop staff member to make him a batch of frosted oatmeal cookies for our upcoming retreat, I set to work. You would think that I have on hand a trusted recipe for oatmeal cookies, but I don’t. In fact, I have never been all that pleased with the oatmeal cookie recipes I come across. They are too often doughy, overly sweet, and full of distracting bits like chocolate chips and/or coconut.

Because an oatmeal cookie with a glass of milk is a quintessential American after-school snack, I thought that my best bet for a recipe might come from Cook’s Country, a fantastic magazine that includes reliable recipes for the nation’s most beloved dishes, from barbecued beef brisket to skillet tamale pie. Sure enough, when I opened the index to the 2009 bound volume on my shelf, I located an oatmeal cookie recipe that looked promising. What intrigued me was how similar the ingredients were to recipes for oat biscuits that I had been coming across in various Scottish cookbooks and food histories. The Cook’s Country recipe also includes an ingenious step of browning the oats in butter before adding them to the dough, and that technique reminded me of another traditional Scottish staple, skirlie--where oats are browned in fat with onions and spices.

Celtic connections were coming fast and thick by now, and I had not even started to cook! I decided to let the ingredients come to room temperature while I reread “The Backward Glance,” a chapter in Annette Hope’s masterpiece of Scottish gastronomy, A Caledonian Feast. Hope argues that the value of food to Scots who settled in North America had to do with reinforcing their national identity. Distance from home made the Scots keenly aware of what they had left behind--and more importantly, they committed themselves to recreating “home” through the oat crops they grew, and the cows and sheep they raised for milk, curds, butter, and meat.

At the end of “The Backward Glance” chapter, Hope includes a selection of Scottish Canadian recipes from Laura Secord Canadian Cook Book, 1966 that best testify to Canadian-Scots’ national identity; unsurprisingly, she starts with “Oatmeal Cookies”, a recipe remarkably similar to the Cook’s Country recipe I note above.

Doug (my colleague) also wanted me to glaze the cookies. He was recalling a popular store-purchased brand that was super crispy and covered with a glossy sheen of sugar. I loved them too as a kid, but I wanted to avoid bringing in store-bought cookies. And so I pulled another treasured cookbook from my shelf, this time my mother’s 1956 Betty Crocker’s Picture Cook Book. As I thumbed through the chapter on cookies, I was immediately struck by a brown-butter glaze suggested for “Jubilee Jumbles.”

The glaze sounded fantastic, but what pulled me in was the blurb about the history of “Jubilee Jumbles.” This cookie had been chosen “to commemorate the seventy-fifth anniversary of the name of GOLD MEDAL Flour. It happened in 1880 at the International Millers’ Exhibition in Cincinnati, Ohio, when the flour previously known as Washburn’s Superlative was awarded the medal of gold.”

The method and the ingredients for jumbles, however, were nearly identical to Cornish rocks, a cake-like, mildly sweet biscuit that does indeed resemble a rock, given its tan color and shape.

Happy to be able to draw on Scottish, Cornish, Canadian, and American baking traditions, I got to to work, creating the browned butter glaze to spread on my two dozen crunchy oatmeal cookies. North Americans owe a great deal to the various waves of Celtic immigrants whose love and pride of homeland was transferred onto both Canadian and American palates. 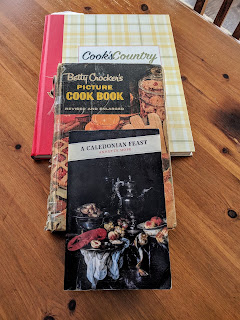 My recipe uses dried cranberries instead of raisins, giving the cookie a slightly sharper, tangier flavor.

1 cup of dried, sweetened cranberries, ½ cup chopped fine, the other half left whole

1 ¾ cups of rolled oats (not instant)

Take the ½ cup of chopped cranberries and put them in a saucepan with 3/4 cup of water. Simmer until most of the water has evaporated, leaving the cranberries plumped out. Meanwhile, heat the butter in a skillet and add in the oats. Toss them to coat with butter, and gently fry the oats until they reach a golden brown color. Add the cinnamon.

In another larger bowl, beat the egg and then add in the sugar and vanilla and mix until smooth. Gently fold in the oats, hydrated cranberries, the whole cranberries, and the flour mixture until just combined.

Roll walnut-sized pieces of dough into balls. It helps to have your hands damp to keep the dough from sticking to them. Place the dough balls 2 inches apart on parchment-lined baking sheets. Bake 13-15 minutes, switching and rotating the baking sheets halfway through. The cookies are done when the centers are just set and the edges are light brown.

Allow them to cool while mixing the brown butter glaze.

Melt ¼ cup butter until golden brown. Stir or swirl the pan frequently, and watch carefully to ensure that the solids do not burn. When the color is golden and it smells nutty, blend in 1 cup sifted confectioners’ sugar and ½ teaspoon vanilla. Stir in 1 to 2 tablespoons of hot water until the icing spreads smoothly. Work quickly to glaze the cookies, as the icing will harden if left unattended.

For those who might be interested, here is the 1956 Betty Crocker recipe for Jubilee Jumbles. For any Cornish readers, don’t they remind you of rocks?

Drop rounded tablespoonfuls of dough about 2 inches apart on a greased baking sheet. Bake just until, when touched lightly with finger, almost no imprint remains, about 10 minutes.

Note: My friend, Caroline, from Liskeard, Cornwall, adds currents and a teaspoon or so of mixed spice (nutmeg, cinnamon, cloves) to her rocks, and that works fine for the Jubilee Jumbles as well.
Labels: British and Celtic Cookery