A Great Cheese Scandal, and the Triumph of Cornish Yarg

What cheese lover would not be entranced by the idea of enjoying a nettle-wrapped milky cheese that melts in your mouth and goes great with a glass of wine? I went to Cornwall two summers ago partly on a quest to find and eat Yarg, one of Cornwall’s culinary claims to fame. Not only did I eat a lot of Yarg, but I also researched the story of its creation, one that includes a lot of downs before finally including a number of ups. 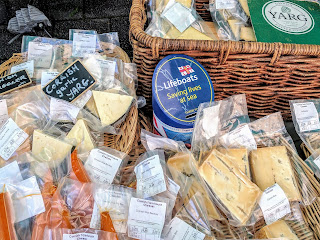 Yarg and other British cheeses on sale at a Falmouth, Cornwall Farmer's Market

Coincidentally, a part of Cornish Yarg’s story shows up in my 1985 Good Food Guide, edited that year by Drew Smith and full of fantastic essays on the perilous state of British gastronomy, including cheese.

For context, the Good Food Guide began in 1951 when Raymond Postgate was determined to produce a restaurant guidebook based exclusively on diners’ reviews with no advertisements. His mission was to apply pressure on caterers (and from there food producers) to raise the quality of British food. At the time of the GFG’s inauguration, the state of British food might fairly have been described as overall deplorable.

However, by 1985, the authority and the power of the Good Food Guide had grown, as had the discernment of consumers, producers, and caterers. More commitment to resurrecting the production of small-scale artisan foods, particularly cheese, was also evident. However, not all was well.

The 1985 GFG essay entitled “The Cheese Scandal” by the late Patrick Rance noted that in the early 1980s, British cheese was on the verge of extinction, in part because the Milk Marketing Board (MMB) monopolized the production and sale of liquid milk and exercised a stranglehold over prices as well as supply, squeezing out small cheese-makers, deemed by many government bureaucrats as “an anachronistic nuisance.”

While many British cheese-makers did indeed give up production, an increasing number began to fight back to save the nation’s heritage as a top producer of highly regarded cheese. Among them were Alan and Jenny Gray of Withiel Valley, Cornwall. They were inspired to turn to cheese-making when they located an old book in their attic that included a 1615 recipe by Gervase Markham for a nettle-wrapped semi-hard cheese.

The Grays christened their nettle-wrapped cheese “Yarg” (their last name spelled backwards). However, the Grays’ initial success led to a nightmare for their fledgling operation, when in 1982-83, the company needed extra milk to meet demand for Yarg but were refused reasonable terms by the MMB.

The story of how and why the Grays were unable to obtain milk to make their cheese is complicated, but without the help of the (now defunct) Council for Small Industries in Rural Areas (CoSIRA), and the work of people like Patrick Rance to draw negative attention to the convoluted and asinine ways of the MMB, Yarg cheese likely would have gone extinct.

As it was, “this story has a happy ending,” Rance writes in the 1985 GFG. A new dairy was established, Lynher Valley Dairy, on the Duchy of Cornwall estate to provide plenty of milk. The Grays sold their Yarg recipe to the owners of said dairy, the late Michael and Margaret Horrell.

A story of Yarg’s s history can be found in a February 2013 article in Cornwall Life. In 1995, Catherine Mead wanted to diversify her family’s farm, and she began working with the Horrells to increase production of Cornish Yarg. Catherine Mead’s success led in 2001 to the establishment of a second dairy, this one at Mead’s Pengreep Farm between Lanner and Ponsanooth, Cornwall. When the Horrells retired in 2006, Cornish Yarg production moved solely to the Pengreep Farm, and the milk for Yarg comes from the Mead family’s Holstein/Frisian herd and from other Cornwall cows whose milk makes upwards of 200 tonnes of Yarg cheese.

Are things better for Britain’s artisan cheese-makers in 2018 than they were in the mid-1980s? Yes, undoubtedly, although red tape, bureaucracy, and the power of industrial cheese manufacturing and factory farming of dairy cows has hardly ceased, as most of us know. But as for Cornish Yarg, I found it all throughout Cornwall and beyond, including in Wales, Ireland, and Scotland.

There was a lot of hype that Yarg would be available in the United States, but newspaper articles proclaiming that victory are dated from 2014, and I have no knowledge of whether or not the export of the cheese into the U.S. has came to pass. Perhaps it’s best enjoyed while traveling in Cornwall anyway. It’s a melt-in-your mouth mild cheese that pairs great with good bread or crackers, fruit, and wine. It’s a reason to make Cornwall your destination, if you ask me! 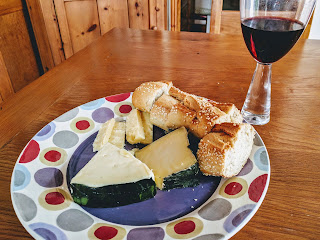