The Welsh and the Cornish are known for their love of ginger, and I would guess that the same could be said for most of the inhabitants of the British Isles. The cookbooks that I have been using this week are full of dishes that rely on both the powdered form of this lovely spice, as well as the root, bruised or finely shredded. 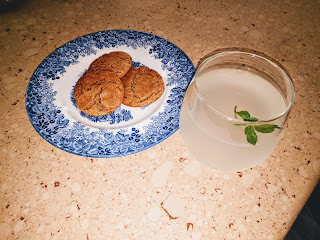 The kombucha craze that has gripped my part of the world got me thinking about making my own brews, and while kombucha seems too complicated for me to manage at this busy time of the academic year, ginger beer seems less so. I keep coming across old and new recipes for ginger beer in Welsh cookbooks, including in a falling apart 1986 Taste of Wales, published by the Welsh Tourist Board. The book includes not only information on where to stay and eat, but also recipes. Last Sunday morning, I gathered the ingredients and got to work making my own ginger beer, using a growler that the week before had held kombucha. In case I had too much, I also had a small 4 ounce bottle on hand for overflow.

Participating in our citywide No Kid Hungry giant bake sale had me also preparing biscuits (cookies to Americans), and short on time and not wanting to rush off to the store, I decided on my personal favorite, Cornish Fairings, replete with ginger as well. Recipes for Cornish Fairings stretch way back. It was customary for people attending fairs and market days to purchase these gingery biscuits as a souvenir or a memento, often to give to a loved one. The tradition was not confined to Cornwall; throughout the British Isles, fairings might have been gingerbread proper or some variation of a ginger biscuit. Having baked a lot of Cornish Fairings, I used my own recipe for this culinary endeavor.

Neither ginger beer nor Cornish fairings are difficult to make, and while one looks towards autumn bonfires, Halloween, and Guy Fawkes, the other looks back to the last days of summer. An ice-cold glass of ginger beer with fresh-baked Cornish fairings? It sounds good to me!


Ginger Beer, adapted from A Taste of Wales

(I do not like sugary drinks, and so the sugar content in my version is less than in the original. You can use up to 8 ounces if you want a sugar hit.)

2 ounces of root ginger, finely shredded, skin and all

Mix together the lemon zest, sugar, shredded ginger, cream of tartar, and boiling water in a large heatproof bowl, like a crock pot. When the sugar is dissolved, set the ginger water aside to cool to lukewarm (around 105 F). 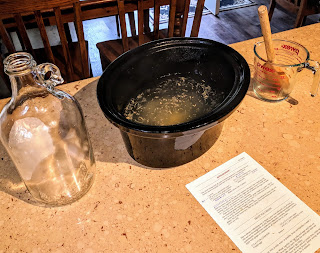 Mix the yeast with two tablespoons of the lukewarm water in a cup, and when the yeast is dissolved, add it to the remaining ginger water and stir well. Cover loosely and set in a warm place for one or two days until the yeast has stopped frothing.

Strain the mixture into the sterilized growler using cheesecloth and a funnel or a small strainer and a funnel. (It’s easy to sterilize the growler and cap by running them through the dishwasher and choosing the sani-rinse and/or the heated dry settings). Add the juice of the lemon. Put on the cap, tip the growler to mix in the lemon juice. Put in a cool, dark place for three days. Serve it ice cold and garnish with fresh mint if you have some.

Mix flour, salt, baking powder, baking soda, cinnamon and ginger together in a large bowl. Add the butter cubes and using your hands, rub the butter into the flour until it resembles sand. Mix in sugar.

Break off walnut-sized pieces of dough, roll them into balls, and space them evenly on the parchment-lined baking trays. The dough will spread while baking, so be sure to leave plenty of room. 9 per sheet tray is ideal.

Bake for 10-12 minutes, checking frequently to ensure that the biscuits are browning to an amber color but not past it.

Leave the biscuits to cool on their baking trays for a few minutes, and then transfer to a rack to cool completely. Makes 2 dozen or so. 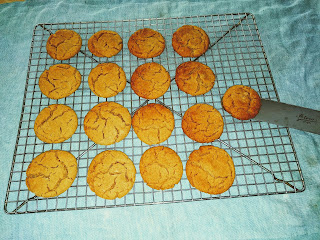