My real job of teaching four college composition classes and co-teaching one culinary class has begun in earnest, thus restricting the time I have to devote to my Celtic food blog. I’m still working away on writing The Atlantic Celts: A Gastronomic Tour from Ireland to Iberia, but my leisure time for all else is curtailed.

And so my posts will be fewer and devoted more or less to what I can do in my leisure time, which is cook dinner and write down the recipes!

I love the simplicity and the tastiness of Anglesey Eggs, or Ŵyau ynys Môn, as it is called in Welsh. Nesting chopped hard boiled eggs in a creamy mash of potatoes and leeks and topping it all with a sharp cheese sauce is my idea of supper. Far too humble to appear on restaurant menus, it is a mainstay of traditional Celtic home cooking given its frugality and simplicity. 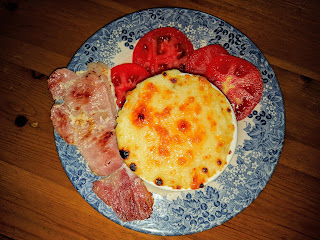 Anglesey Eggs, Part of a Delicious Supper with a Rasher and Tomatoes

Anglesey, a part of Wales, is an island separated from the mainland by the Menai Strait. Why this egg dish is associated with this particular part of Wales is unknown, but the dish’s popularity extends throughout Wales, and for that matter, I have yet to encounter a Celtic part of the world that does not enjoy some version of eggs prepared with cheese. The Scottish tend to nest their eggs in breadcrumbs before topping them with cheese and popping them in the oven, while the Bretons, like the Welsh, often prepare the dish with leeks mashed into a potato nest surrounding the eggs before likewise topping them with cheese.

I try to put meals together at home based on what leftovers lurk in my fridge, and what is seasonably available at my farmer’s market. Yesterday, when I spied a gorgeous pile of fresh-pulled leeks next to just-dug potatoes, I immediately thought of Anglesey eggs. I had some hard-boiled eggs to use up at home, and as luck would have it, a kind student had gifted me a week ago with a delicious wedge of locally made Caerphilly Cheddar. Along with some bacon and sliced fresh tomatoes, I knew just what to make for supper.

Recipes for Anglesey eggs are easy to find and vary, based on people’s tastes, how many they want to cook for, and what ingredients are at hand. My interpretation is inspired by Bobby Freeman’s recipe in First Catch Your Peacock: A Book of Welsh Food, and Gilli Davies’ Lamb, Leeks & Laverbread: The Best of Welsh Cookery. This dish comes together quickly if you have leftover mashed potatoes and hard-boiled eggs on hand, but it is also easy to make it from scratch. If so, plan on some extra time in the kitchen, however. You can cut down on dishes to wash by putting on a medium-sized pot of boiling water and cooking your eggs for ten minutes, then using that water for boiling your potatoes, roughly twenty-five minutes, and at the end, adding your leeks to the boiling water and potatoes for roughly five minutes.

As we slowly head into autumn in my part of the world, I will be happy to return to using my oven to create many colder-weather delights.

Happy cooking to you all,  Andrea

Anglesey Eggs: Serves up to six as a light meal
The recipe is given using American measurements

3 Tablespoons butter, plus 1 Tablespoon for the potatoes, and enough to grease the custard cups

6 custard cups or a casserole, well-buttered

1. Start a medium-sized pot of salted water boiling. When it is at a gentle boil, carefully add your eggs. Allow them to cook 8-10 minutes at the gently boiling level. Remove, set aside to cool and peel.

2. Now add your potatoes to the still boiling water. Allow them to cook for twenty minutes. Check them for tenderness.

3. Five minutes before the potatoes are easily pierced with a knife, add the chopped leeks to the boiling water. 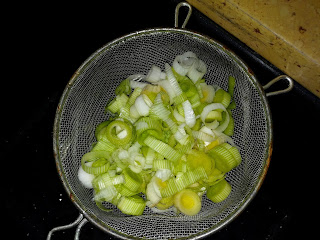 
4. Drain the potatoes and leeks, and mash them with one tablespoon of butter, adding nutmeg, salt, and pepper to taste. If the potatoes are unusually dry, add a bit of milk or cream to them. Set aside.

5. Make a white sauce by melting the butter in a saucepan (or you can use the same one you used to boil the potatoes, leeks, and eggs). Stir in the flour and cook for a full minute, adding in the dry mustard powder and a bit more salt and pepper to taste. Slowly whisk in the half-n-half and bring the mixture just to boil. Allow it to cook for a minute or so, constantly stirring to ensure that the sauce does not scorch. Remove from heat and whisk in half the grated cheese. 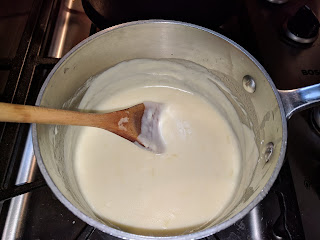 7. Butter six custard cups or one casserole. Using a fork, press the mashed potatoes and leek mixture around the sides and on the bottom of cups/casserole if extra potatoes remain. Put the chopped eggs in the middle. Cover with the cheese sauce, and top with the remaining shredded cheese.

8. Put the custard cups or the casserole on a baking sheet to protect your oven from any drips.

9. Brown quickly under a hot grill or a very hot oven (450F or 230C) for 10 minutes, keeping your eye on the process to ensure that the top does not burn. 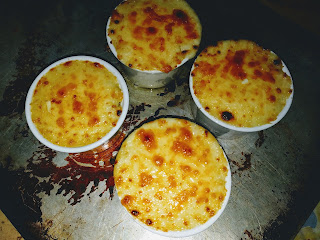 Just out of the oven. I keep an old baking sheet just for such purposes as this!