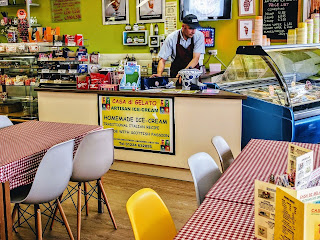 Having grown up in Kansas City, Missouri, I was lucky to have excellent Italian food all around me, thanks to the immigrants who settled there in the early 20th century. Having escaped the grueling deprivations that defined their life in Southern Italy, these immigrants had little to offer skill-wise in the very urban enclave where they were settled, Kansas City’s North End. Nonetheless, their familiarity with agriculture, understanding of food’s importance to culture, and their expertise in turning raw products into extraordinary cuisine meant that many immigrants often became Kansas City’s most successful greengrocers, bakers, butchers, restaurateurs, and ice cream makers.

While it’s taken for granted that most cities, from New York to Paris, have their “Little Italys” or “Latin Quarters,” many are unaware that Scotland as a whole--cities, villages, and towns--also benefited from Italian immigrants who settled there in the first half of the twentieth century. The mark that they have made culturally and gastronomically cannot be overlooked. 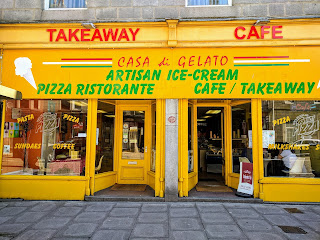 While staying in Aberdeen last summer, I sought out many Italian food establishments in order to participate in that ongoing gastronomic legacy. Thanks to some leads from friends, I made Casa di Gelato at 194-196 King Street one of my destinations.
Establishments like this one are not really about Italian food. Don’t think lasagna and risotto, tortellini and pesto, in other words. Rather, think full Scottish breakfasts, egg salad sandwiches, toasties, or as journalist Maggie Mallon puts it, the kind of place where you “sit in a leather booth with a bacon roll, milky coffee and a Knickerbocker Glory--and your newspaper, of course.” In other words, these cafes are amalgamations of British food culture and Italian expertise. To adapt and fit into their new homes, many Italian immigrants took the cheapest, most bountiful foods, be it fish, potatoes, pork, or milk, and they turned them into familiar local favourites: fish and chips, bacon rolls, toasties (toasted sandwiches, often with cheese as a component), and all-day fry-ups. However, these Italian entrepreneurs also produced a food and a beverage that would inevitably delight their customers: gelato and Italian coffee, particularly cappuccino (which I will add, seems to be the most popular coffee people order all along the Atlantic Celtic Coast).

While Casa di Gelato did not have leather booths, it did have vinyl red-checkered tablecloths, a clean lino floor, and a laminated menu with the standbys: bacon or sausage rolls, Scottish full breakfasts complete with black pudding, paninis, and toasted sandwiches. It also of course had on offer classic old-time ice-cream specialities, including sundaes such as lemon meringue or mint fudge; banana splits; and the classic 1920s-era Knickerbocker Glory: layers of multi-flavoured ice creams layered with various syrups, topped with loads of whipped cream and a cherry. Indeed, the first sight to greet customers as they enter Casa di Gelato is the kaleidoscopic ice cream counter, where house-made sorbet and gelato all cry out for your attention. The orange sorbet, I learned later, was voted the best in the UK in 2016 in the National Ice Cream Competition.

On the Thursday I visited, around noon, restaurant regulars were seated in their usual corner, gossiping, drinking milky coffee, and eating breakfast. I had a cheese toasty, and as I ate, I enjoyed watching the staff mingle with their patrons, from shoppers who had just finished up at the Morrisons across the street, to mums with children begging for an ice cream. This was no-frills dining at its finest, and after I finished my sandwich, I approached the counter to place my gelato order. “What do you most recommend?” I asked the waitress. She told me that while her favourite is vanilla, I should try the most popular flavour, and predictably, it was cappuccino. “One scoop please,” I requested, “in a cup.” Even for such a modest order, that scoop was served in a sundae dish complete with a wafer as garnish, and it was indeed excellent, redolent of a cappuccino, albeit an icy one. 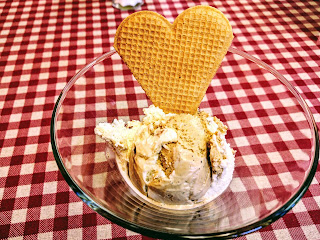 I smile to think that in the north of Scotland, a place that this week has been chilly, and often cloudy and rainy, people fancy an ice cream, or a talley, as it is colloquially called in these parts. A stroll up Union Terrace and onto the Rosemount Viaduct last night confirmed this. After a day of rain and mizzle and a cloudy evening with the temperature around 13 Celsius, cafes were doing brisk business, as much as the pubs, and with an assortment of ages all peacefully mingling and eating gelato at Crolla's Gelateria Rosemount. In fact, the scene was nothing more or less than I what I see on Kansas City summer nights at various ice cream stands around town, albeit with temperatures in July nothing lower than 30 Celsius, even after the sun has gone down. 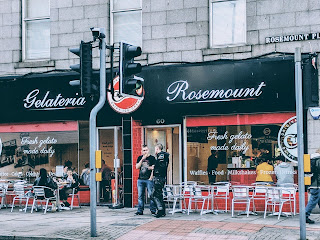 The world owes a lot to Italians who left their homeland and settled elsewhere. In a nation awash in dairy, as is Scotland, the inevitable thing to do was churn it into gelato, a food of enduring popularity across all races, classes, and ages.
Labels: British and Celtic Cookery