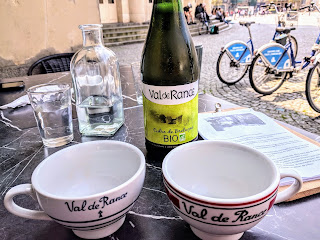 If there’s one beverage that unites the Atlantic Celtic nations from Asturias, Spain, to Wales, UK, it’s cider. The often damp, mild climate is kind to apples, and a dizzying number of cultivars, including hundreds of heirlooms, are turned into ciders favored by locals and visitors alike.


I first tasted and fell in love with cider when studying at the University of Exeter in Devon, and last summer as I trekked through Devon and Kernow (Cornwall), I had my share of this wonderful beverage. With typically no more alcohol than beer, and often less, it's easy to sip cider at lunch before starting off again on a hike or a wonder through town. And so, I had a great deal of enthusiasm for starting my Celtic travels this summer in Bretagne across the English Channel where my plan was to again pick up on the cider trail, or cidre, as it is called there.

While all of Bretagne is famous for its cider, Cornouaille (most of which was absorbed into the diocese of Finistère after the French Revolution) is the highest regarded; its cider was the first to be recognized with the appellation contrôlée label. Indeed, Cornauaille’s respect for cidre is second only to Kernow’s, and given that the region was settled by Cornish princes and saints, and given that its inhabitants thus spoke a variant of the Brythonic language similar to Cornish, it makes sense that both regions would share a love of fermented apple juice. 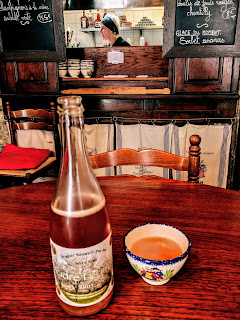 Inside Crêperie au vieux Quimper, in the heart of the historic Cornouaille region

Nonetheless, Cornouaille was hardly the only Bretagne region to produce outstanding ciders. Everywhere I cared to look, I saw orchards. Unlike eating apples, cider apples are colloquially known as “spitters,” given that if you bite into one, its mouth-puckering, sour, and/or bitter characteristics might have you spitting it out. Cider apples are generally divided into four categories: bittersweet (low acid and high tannin), bitter sharp or sour (high acid, high tannin), sharp (high acid, low tannin), and sweet (low tannin and low acid, although “sweet” is relative to the sweetness of the other cider apples, not relative to eating apples). Cider makers then produce flavor profiles for their final products by blending various types of apples. The resulting range, nuance, and sophistication is on par with French wines. 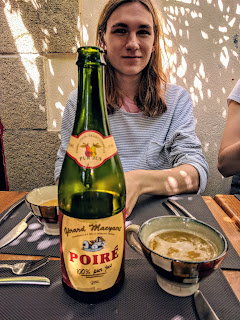 Poire (Perry in English), is similar to cider but made of fermented pears.

To eat a galette without an accompanying mug of cider is unthinkable for many Bretons, although traditionally, galettes were often eaten alongside a glass of buttermilk. Both beverages lend themselves to a galette because the essential acid helps cut through the rich fattiness that best describes galettes griddled in and brushed with butter. The fillings often add more richness, particularly for two of the region’s most popular: the galette complète, a buckwheat crepe stuffed with Emmental cheese, ham, and egg; and the kaletez gant silzig, the famous Rennes sausage galette. Of course apples and pork themselves cry out to one another. Celtic farmers fattened their pigs on windfall apples to sweeten the animals’ flesh. It only makes sense to accompany the finished product with cider. 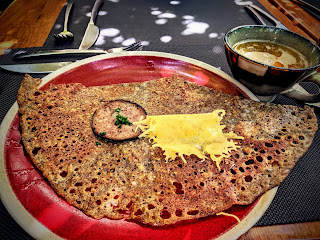 The Andouille Sausage Galette is most traditional in this region. See my previous blog post on it.


Throughout the Celtic Crescent, a resurgence of interest in traditional foods, particularly ones that taste of the terroir, has motivated farmers to protect heirloom cider apples that had been in danger of going extinct; that resurgence often motivates consumers to pay extra money to taste those heirlooms in the resulting cider.

Cider also lends itself to Celtic cooking, and Bretagne is no exception. In Kemper (Quimper), the capital of the Finistère department, Maquereaux au cidre (Mackerel in cider) is a popular dish, one where again, the combination of acid and fat is integral to the dish’s complementary flavours. And, just as a galette complète or kaletez gant silzig lend themselves to a mug of cider, so too does a pork loin gently simmered in cider, along with slices of sweeter dessert apples and garden herbs.

My most memorable Bretagne meal took place in the seaside hamlet of Santec, close to Roscoff. Without a car and with no bus service or taxi to be found, my family and I depended entirely on our feet, thus making Santec’s delightful Les Embruns a godsend of a restaurant given our lodging nearby. On a mild Sunday in early June, we sat at Les Embruns looking out over a very chilly and windy Atlantic. This little restaurant is regarded for its mussels, and I ordered mine prepared in a cider cream sauce alongside the all-important frites. The mussels were just-caught, briny and plump. The cider cream was redolent with the brininess of the mussels. With a baguette as well as the frites to mop up the remains, it was a dish from for the gods, accompanied of course, by a mug of brut cider.

A stiff Atlantic breeze, an earthen bowl of moules au cidre, and the chatter of locals at the bar, many of whom drinking--you guessed it--all varieties of cider, encapsulated my Bretagne experience and will always signify for me the best of what "Little Britain" had to offer a hungry diner intent on drawing connections between its foodways and those of the other Celtic nations. 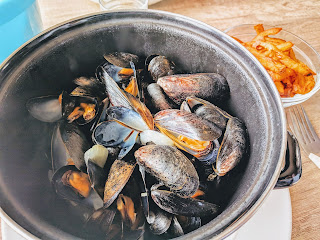 “Cider (Cyder, Hard Cider): The Product and Its Manufacture. Encyclopedia of Food and Health (2015)

Note: All blog posts and photos are the exclusive property of Andrea Broomfield (unless otherwise stated) and must be explicitly acknowledged as such.
Labels: British and Celtic Cookery