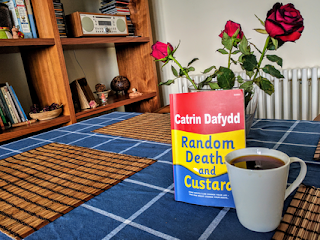 When trying to understand a country’s cuisine, it helps to be in that country eating and cooking the food, but it also helps to read fiction set in that country. Food does not need to be the focal point as long as it’s referenced in some fashion. Cookbooks only go so far in offering insight because who’s to say anyone really cooks from them? If I buy a cookbook, it’s used; the more stained and marked up the better because it suggests someone used the cookbook.
But back to fiction. I recently finished Catrin Dafydd's novel, Random Deaths and Custard, set in Pontypridd, the county town of Rhondda Cynon Taf, in Wales. I loved it enough to write this blog post exploring some of its themes.
The novel focuses on what Dafydd rightly describes as the “complex cultural experience” that defines Wales, a country where both English and Welsh are the lingua franca; however, this “complex cultural experience” also typifies Welsh food and British food in general. In short, how can a land with so many rich culinary traditions and extraordinary natural resources, from the sea to the pasture to fields, have so much bad food? Obviously I am not the first to ask such a question!
Before I go on any further, here’s the plot of Random Deaths. 18-year-old Samantha has graduated from her Welsh-speaking school and is employed by the local custard factory (think Bird’s Custard Powder). Sam’s ability to speak some Welsh lands her the task of translating English ads for the company into Welsh, although her mistakes end up plastered all over the company lorries.
In a narrative style that reminds me of Holden Caulfield from Catcher in the Rye, Sam tells of her crush on a catalogue salesman who saves her from choking to death on a fish finger. She was gulping it down when a knock came at the door, and when she answers and then starts to shut the door in man's face, she chokes. I won’t give away the plot, but I recommend this clever, at turns darkly funny and sad novel of a girl finding her way into an adult world.
Now, as this synopsis suggests, the novel has something to do with food, but Dafydd is not that focused on the meaning of the food beyond the stark realism of the family's life, the comic devices, and the plot twists. So, enter me, the food historian, and that age-old question posed above.
I count 60 food and drink references in Random Deaths, but only four are about something other than processed food, homogenisation of food, or the happenstance way that food is consumed (as in “Get Nanna some chips from Hoi Wan too, will ew?” Sam’s mam shouts). While the novel is about Welsh culture, there are the only four Welsh culinary references:
One: Samantha’s mam feeds the skin from Nanna’s morning porridge to the birds. Wales has strong tradition and love of oat porridge, as does Scotland.
Two: In imagining her own funeral, Sam supposes that her nanna would arrange “a proper Welsh” one with “bara brith and Welsh cakes and everyone wearin’ daffodils on their suits.” (Shortly thereafter, bara brith is indeed served at a funeral, but I won’t give away whose). 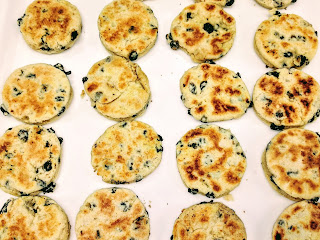 
Three: Sad about her shattered family life, Sam reflects: “I used to feel a ‘Sunday lunch and gravy’ feelin’ to Sunday, but ever since Gareth went to Iraq and Dad got locked up, we haven’t done anythin’ like that in our ‘ouse really. And now Sunday’s just like any other day.”
And finally: Sam’s Anti Peg serves her bara brith and butter when Sam goes to see her.
Some other food allusions in the novel are British (custard, Fray Bentos, beans on toast for example), but a shocking number are about American-imported junk food and franchises. For example, Sam and her friend are excited to eat KFC at the retail park where “all the people sittin’ on the tables were gobblin’ their food down.” Also invading the culinary landscape is Lidl, the German grocer that like Aldi is set to take over the UK and the USA with its cheap prices and its introduction into the UK diet of, as Sam puts it, “weird German stuff from jars,” or as Sam’s mam puts it, German food that’s “bloody good for you. Good for ewer bowels.”
So, what to make of this? The struggle that Catrin Dafydd channels through Sam has a lot to do with conflicting allegiances to friends and family and country. Class is obviously also at play here, with food prices, low incomes, time crunches, and education. Sam, unlike her friends, has retained some Welsh from her education and through the positive influences of her nanna, Anti Peg, and her nanna’s ex-lover. Indeed, she wants increasingly to practice Welsh and use it. She also recognises that those who speak Welsh fluently are often the “posh people”--the “Welshies,” or those with education and money who simultaneously attract, fascinate, intimidate, and repel Sam. At one point, these Welshies invite her to their supper of vegetarian bean burgers and jacket potatoes. “I’d rather eat shit than eat that type of food,” Sam confides to her readers.
I wonder, though. Could Sam’s increasing respect for Welsh and her heritage lead her to think more about Welsh food and traditional culinary practices, like that Sunday roast and gravy she remembers from a more stable point in her family life? When her brother returns from Iraq and decides that he might become a chef, that possibility is even further hinted. 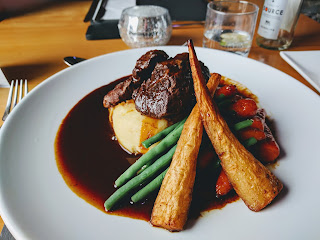 
I have learned that all up and down the Atlantic Celtic Coast people are considering their heritage and history, and many attach not only meaning to their language, but also to their cuisine, and they are salvaging, protecting, and championing it. The influence of the Slow Food Movement has not been lost here in the UK. I take tremendous heart in the steps made all around me to educate people about the cost of what is being lost culinary-wise, and what there is to gain if distinctive regional foods can be saved. Everything from Cornish pasties to Welsh cockles to Aberdeen rowies are worth promoting, not only for commercial consumption, but for home preparation. I hope that in our own small way, Beebe and I with Atlantic Celts: A Gastronomic Memoir from Ireland to Iberia might contribute to this snowballing movement. 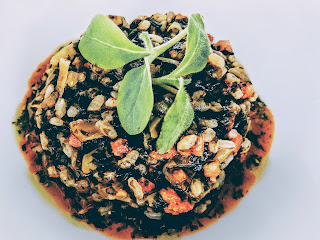 Chef Pawel Banaszynski's fabulous use of laverbread in a risotto, at Pysgoty
In the meantime, Catrin Dafydd wrote a sequel to Random Deaths and Custard. Is it possible that Sam might have begun to draw connections with Welsh, Wales, and a food heritage? I can’t wait to read it to find out.
Labels: British and Celtic Cookery