The Fars of Breton 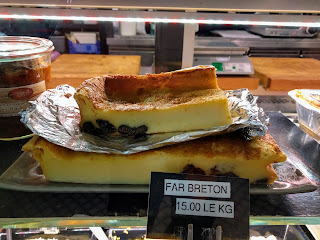 Hello Friends! I have started the second part of my travels and tastings this summer along the Atlantic Celtic Nation rim, beginning in Brittany (Breizh). A delectable dish that immediately had me drawing connections to the traditions and flavours of other Celtic nations is Far breton. It’s hard to arrive in Rennes and not already know about kouign amann, galettes, and crepes (more on those at a later time), but I was hoping to come across other Breizh specialties that would tie my work from last summer to my adventures now. My wish was fulfilled.
So, what is the Far breton, or Farz fourn? The base of this traditional sweet is similar to a clafoutis, where eggs, whole milk, flour, and sugar are whisked together and baked; however Far breton also includes melted butter in the mix--it's not optional. Instead of being filled with stone fruits like cherries, Far breton includes dried fruits, typically prunes. The first time I saw it was in Rennes, at Boulangerie Augustin, displayed temptingly next to a flan (also similar to Far breton), and Tarte normande. Given that Far breton had “breton” in the name, I had to try it, and once I bit into the rich, custard center, I was immediately reminded of both the English custard tart and, given the distinctive near-burnt patches on Far breton’s top, of the Portuguese Pastel de Nata. A Celtic connection indeed!
I have sampled three different Far bretons this week, and as I sampled, I also researched this wonderful specialty, finding out that historically, Far breton has a bit in common with that other English staple, the Yorkshire pudding. While their textures are different, the ingredients are not, in that both are an eggy, floury mixture dependent for flavor on animal fat, be it butter in one, or dripping in the other.
Throughout Breizh, housewives would prepare a savoury Far of buckwheat, eggs, milk, and butter (and of course some salt) to accompany the dinner of bacon, potatoes, and greens. Sometimes, Far was prepared in the same pot as the bacon and potatoes, thus absorbing the flavor of the stock. The Far served the same purpose as Yorkshire pudding, where in that case a batter of eggs, milk, salt, and flour was poured into piping-hot dripping from the joint roasting above. It quickly rose, creating a delicious, eggy bread.
The sweet version of Far breton was also known as a kind of plum pudding or porridge--and thus, another connection to the British Isles. Wealthy people who had access to plenty of wheat flour, dried fruits, and sugar would create their Far as a sweet course, baking it in the oven. This version was also customary on many Breton tables for Christmas and saint days, given its decadent, expensive ingredients. By the mid-19th century, the sweet version had become nationally popular, no longer confined to the west of France, according to the website, Regions of France . 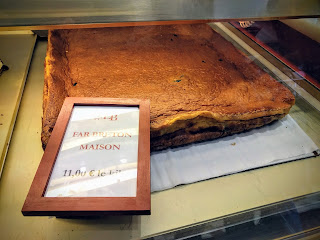 I have yet to create my own version of Far breton, but many recipes are out there if you would like to give it a try. I would recommend checking out Real French Food, which also gives some of the history of the Breton far along with a recipe to try. 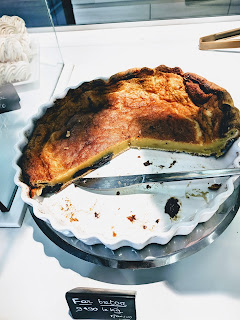