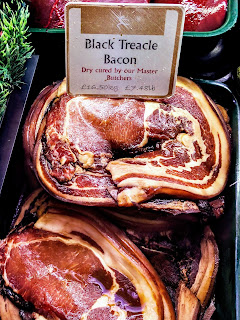 Both Devonshire and Cornwall share a love of dairy, apples, and pigs that connects them to other Celtic nations, particularly Brittany, Wales, and Ireland.
I spent an afternoon touring Dart Farm Village,Topsham, Exeter, back in May, 2017, entranced by the huge food hall that champions foods from the West Country. The gorgeous cuts of meat on display in the butcher case gave me pause, especially the black treacle bacon.
In researching Devon foods, authors Laura Mason and Catherine Brown (Traditional Foods of Britain: An Inventory), write that a Devonshire cure for ham (and I would imagine also bacon) involved a two-day dry-salting followed by a salt and sugar brine or "pickling." Before saltpetre was available in a reliable form, treacle acted as both the preservative and flavouring in the brining process, and clearly that ancient tradition lives on in Dart Farm’s Devonshire bacon.
If you're in the vicinity of Exeter, check out @dartsfarm (http://www.dartsfarm.co.uk/general/food-drink.html)