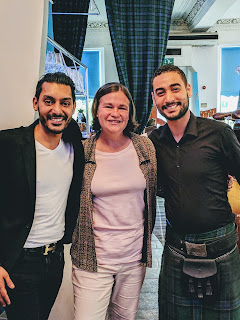 When planning my month in Scotland back in July, 2017, I had a hunch that I would need a full week in Scotland’s largest city, and when I arrived in Glasgow, I knew I had made a wise decision. As I walked along Sauchiehall Street towards my lodging, I could not believe the number of non-franchised restaurants shouting for my attention. The diversity on offer was also impressive, with everything from Italian takeaways to Mexican cantinas, and even an upscale American steakhouse thrown in for good measure.
After a week of eating my way around the city, I arrived at two observations: Glasgow is testimony to the fantastic things that happen when people from all over the world resettle in a place and use both their culinary traditions and imaginations to create wonderful food. A willing audience of diners looks forward to the results, egging on the chefs, rather than fearing the results. Second, Glasgow was the one city where I could dine out on a lark, without needing to do any research, and still have a fabulous meal.
“People Make Glasgow.” The city slogan resonates culinarily speaking, given the contributions that centuries’ worth of immigrants have made or now make to their new home. The Merchant City thrives off of the resulting innovation and dynamism, architecturally, spiritually, artistically, and most certainly culinarily.
Take Ox and Finch (920 Sauchiehall Street). This Good Food Guide recommendation and Michelin Bib Gourmand winner typifies Glasgow’s culinary esprit de corps. While waiting for my meal, I took out my pen and circled on the paper menu all the raw ingredients that constitute Scotland’s Larder and that form the chefs' building blocks: Clyde Valley tomatoes, heirloom apples, beetroot, berries, smoked mackerel, smoked salmon, sea trout, skate, scallops, crab, haddock, chicken livers, ham hocks, deer roe, and assorted Scottish cheeses. With this abundance, the chefs create tapas-style dishes with strong North African and Mediterranean accents. A blindingly magenta beetroot hummus smeared against snow-white-whipped feta, topped with EVOO infused with the flavor and crunch of toasted dill and cumin seeds then liberally garnished with fresh dill fronds. How could I not love that first course? 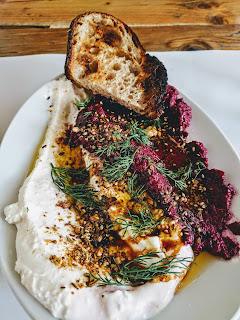 Then, out comes a grilled--or blistered, burnished--mackerel fillet topped with the bracing sour-bitter-saltiness of ground preserved lemon. I sat back and let the flavours wash over me the way I allow Carl Orff's Carmina Burana to do the same in a concert hall. I did not want to leave Ox and Finch any more than I want to leave the concert hall. Nonetheless, days later I can still taste, smell, and see those extraordinary Ox and Finch creations, and I witnessed this sort of playfulness and loveliness of food everywhere I visited in Glasgow, from food trucks to fine-dining restaurants, to eclectic, funky cafes like Singl-end.
In fact, Singl-end at 263 Renfrew Street gets to my second observation. I did not have to plan out every meal in order to avoid wasting money on mediocre or downright bad food. I realise that bad food is everywhere, and surely Glasgow has its pitfalls. However, this was one city where, when I ended up at a restaurant without having done advanced planning, I still had terrific food. That’s an indication of a city building a world-class culinary reputation.
It was late Saturday morning when I woke after a busy night out with Iain Burr, whose fantastic car and know-how made it possible for me to explore Glasgow’s culinary depths (thanks, Iain!). Brunch made sense, but I was too lazy to do any research. When I exited my lodging on Renfrew, turned right and saw Singl-end Cafe, I was happy to descend its steps to the entrance. Located close to the Glasgow School of Art, it made sense that Singl-end would have a hip, eclectic vibe. Artfully arranged breads and cakes greet customers when they enter, along with that sharp, welcome, aroma of freshly ground coffee. The menu was short and to the point--and all options looked terrific, but again, it’s about taking Scotland’s larder and using it to create inspired cuisine. I chose toasted homemade bread laden with fresh avocado and topped with grilled cherry tomatoes, halloumi, and streaky bacon. I relished the salty, briny halloumi up against that creamy, chili-spiked avocado, against the crustiness of the toasted bread and that decadent crowning of Scottish bacon. Perfect, and I did no research. I just walked out my door and walked into this cafe heaven. 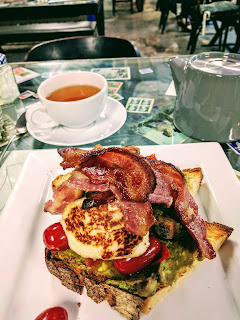 I’ll conclude with my final meal in Glasgow, one that I did plan because I speculated that it would encapsulate what Glasgow is all about, food- and culture-wise: Mr. Singh’s India (149 Elderslie St). This restaurant playfully blends into its decor, menu, concept--even the waitstaff’s uniforms--, its proud Scottish-Indian heritage. Co-owner Mark Singh was kind enough to tell me all about the family’s legacy. Back in the 1950s restaurant founder, Jit Singh Mastana Swali, was celebrating Hogmanay where family members all contributed to the feast, from curries and mashed neeps to pakoras and haggis, shortbread and black bun. The patriarch ended up, accidentally or deliberately, mixing up his helping of haggis with a helping of curry, and inspiration hit. With someone’s lipstick, a family member jumped up, and on a large mirror, they brainstormed a menu of Scottish-Indian fusion food; a restaurant dynasty was born. Three generations of the Singh family treat patrons to a cuisine that exemplifies the spirit of Glasgow, its blending of culinary traditions and techniques with the Scottish zeitgeist.
For those planning a trip to Glasgow, below is a list of the other places I ate and that I recommend for experiencing how the Merchant City has come on the scene as a culinary destination.
Fratelli Sarti (121 Bath Street and other locations in Glasgow): In its 25th year, this Italian restaurant offered up one of the best pizzas I had during my travels: Pizza Tirolese, thinly sliced wild smoked boar atop Fior di Latte Mozzarella on a crisp pizza crust. Fusion at its best.
Gandolfi Cafe (84-86 Albion St): A classic restaurant with some of the most highly regarded fish dishes in Scotland. My Arbroath Smokies were prepared en casserole with tomatoes, cream, and Parmesan cheese. Bubbling hot, mouthwateringly delicious. My dining companion, Iain, was treated to a haggis that was the best I tasted on this summer adventure. 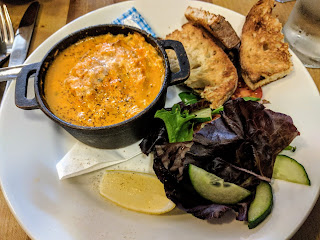 Saramago Cafe (Centre for Contemporary Art, 350 Sauchiehall St): An airy, spacious cafe that celebrates the Scottish larder in the most healthful of ways, with a stunning selection of vegetarian dishes. I loved my beet-green and rocket salad with olive tapenade-topped focaccia.
Sichuan House (345-349 Sauchiehall Street): The hot and sour soup came out promptly, steaming hot, and just as it should also be: sour and spicy, with a generous number of shrimps floating in among the bamboo shoots, julienne pork, mushrooms, and scallions. The kung pao chicken was done in classic Sichuan style, glistening with red chillies and lots of those addictive Sichuan peppercorns that when bitten into produce a simultaneous numbness and fire on your tongue.
Labels: British and Celtic Cookery