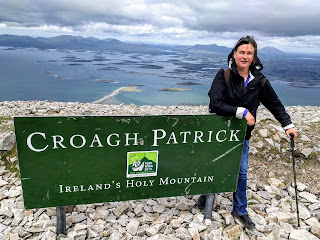 What does climbing 2510-foot Croagh Patrick (Crauch Phadrig) have to do with food and Irish and Celtic culinary culture? A simple answer finally came to me: soul food. For some five thousand years, Croagh Patrick as been the focal point of spiritual pilgrimage, and while in Pagan times the pilgrimage was associated with physical feasting, in early Christian times, it was associated with spiritual feasting: training one’s thoughts on God and subsuming physical hunger to the glories of Christ and heaven. For me to better understand Irish and Celtic foodways, my pilgrimage to Croagh Patrick was essential, but at the time, I was unsure why. 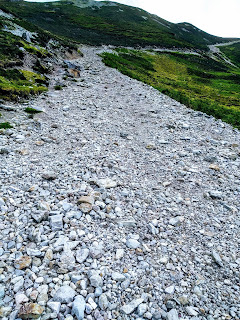 The trail has to be the rockiest, most diabolical one that I have ever encountered. No concessions are made to the hiker. There’s no switch-backing, there’s no smoothish dirt-pack, and for that matter, there’s not even an initial “let’s-ease-you-into-this-with-a-paved-first-mile-path” approach. I did not notice these fine points initially, as I was too eager to just climb. However, around 400 feet from the summit, I gingerly plunked myself down on a precipitously situated bolder in the midst of a steep rock face and the truth of the matter hit me. One wrong step or loose rock or boulder, and I could tumble and end up scraped to bits with broken bones. But my husband was up there ahead of me, almost to the top, and what was I going to do? Scream up to him, “I can’t go on anymore! I’m scared!”? So, I decided to worry about the descent only after I had reached the summit.


To take my mind off my fear of heights and my worry, I focused on what this mountain had to do with food. That approach helped.

As the summit came into view, I realized that in Celtic times, Cruach Aigle, as Croagh Patrick was called, was a spiritual place where people marked Lughnasadh, the point halfway between summer solstice and autumn equinox, a time when the god, Lugh, would seize the harvest for humankind and defeat blight. People brought the season’s “first fruits” as offerings, the first produce of their gardens and their fields. A bull was presumably sacrificed as well. Rounds of eating, drinking, and games transpired as people celebrated the sun and earth’s bounty, praying that enough food would be harvested throughout the summer and autumn to keep them from starving during the dark winter. Lughnasadh was thought to be celebrated on the tops of mountains and hills, as close to the sun as possible; hence Croagh Patrick’s importance. 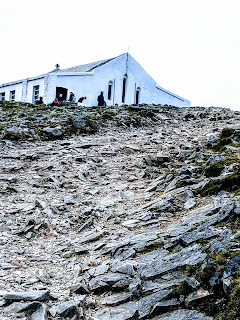 As I predicted, the descent from Croagh Patrick was ten times more harrowing than the ascent. Although some people were scurrying past me down that steep rock face, I carefully used my hiking stick and my feet to inch back down out of the clouds. Understanding that Christian pilgrims meditate and pray as they make this journey, I did just that, focusing on each line of the Lord’s Prayer to take my mind off the pain of developing blisters, as well as my fear of falling.

As one of the earliest peoples to adapt Christianity, the Irish changed the name of Cruach Aigle to Croagh Patrick to acknowledge Ireland’s patron saint and his legendary forty days’ fast at the mountain’s summit. From the physical feast that characterized Lughnasadh to the fasting that marked Reek or Garland Sunday (this year on July 29th), Irish spirituality deals with hunger and satiation: metaphysical, spiritual, physical, and sensual. These contradictory impulses inform Irish food culture today, and making this climb helped me to see more clearly how and why, especially when I factor in the Great Famine and its own lasting consequences.
Labels: British and Celtic Cookery